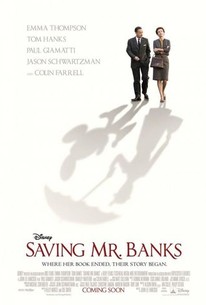 Two-time Academy Award (R)-winner Emma Thompson and fellow double Oscar (R)-winner Tom Hanks topline Disney's "Saving Mr. Banks," inspired by the extraordinary, untold backstory of how Disney's classic "Mary Poppins" made it to the screen. When Walt Disney's daughters begged him to make a movie of their favorite book, P.L. Travers' "Mary Poppins," he made them a promise-one that he didn't realize would take 20 years to keep. In his quest to obtain the rights, Walt comes up against a curmudgeonly, uncompromising writer who has absolutely no intention of letting her beloved magical nanny get mauled by the Hollywood machine. But, as the books stop selling and money grows short, Travers reluctantly agrees to go to Los Angeles to hear Disney's plans for the adaptation. For those two short weeks in 1961, Walt Disney pulls out all the stops. Armed with imaginative storyboards and chirpy songs from the talented Sherman brothers, Walt launches an all-out onslaught on P.L. Travers, but the prickly author doesn't budge. He soon begins to watch helplessly as Travers becomes increasingly immovable and the rights begin to move further away from his grasp. It is only when he reaches into his own childhood that Walt discovers the truth about the ghosts that haunt her, and together they set Mary Poppins free to ultimately make one of the most endearing films in cinematic history. Inspired by true events, "Saving Mr. Banks" is the extraordinary, untold story of how Disney's classic "Mary Poppins" made it to the screen-and the testy relationship that the legendary Walt Disney had with author P.L. Travers that almost derailed it. (C) Disney

Kathy Baker
as Tommie
View All

Forget super. This bighearted and intelligent drama is supercalifragili. . . .you get the idea

The whole thing leaves you with an appalling chill. It feels like a warning from Hollywood to the ambivalent creators of anything: Take the spoonful of sugar or we'll force-feed it to you.

Pencil Thompson in now for an Oscar nomination, and maybe a win, and prepare to leave the theater humming the iconic songs.

The sap doesn't run too thick, although it does run, and the movie certainly has a patented Disney upbeat feel much of the time. It's more a spoonful of sugar than medicine for aging baby boomer's souls.

Saving Mr Banks is a merciless film. It hits you with every sentimental low blow it can think of. Then it pounds you again. And when you're down, it jumps on you.

With eye-popping set design of the 60s, featuring sunny Los Angeles and turn-of-the-century Australia with its Wild West essence − the film is a true winner.

Saving Mr. Banks is beyond cool. You won't need a spoonful of sugar to taste the sweet charm of this story. It's supercalifragilisticexpialidocious!

An example of an inability to maturely deal with the very adult details in the lives of adults responsible for the output of family friendly entertainment.

Saving Mr. Banks is emotional manipulation intended to excuse the blackmail-based commodification of one woman's dream.

Saving Mr. Banks' incredible cast are firing on all cylinders, from the top tier to the supporting, which results in one of the funniest, most touching films of the year.

"INSPIRED by the extraordinary backstory of how Disney's classic "Mary Poppins" made it to the screen." Sure they must have distorted the facts to turn it in Disney's favor, thereby making it inspirational!! While maybe a bit dramatic, the transformation of Emma's character seemed quite unrealistic. The story may work better for children, I guess. For me, even Emma and Hanks' efforts/performances proved short for Saving Mr. Banks.

Like practically the entire world I got history with Disney and so went into this with huge expectations. Big mistake. Halfway through I began wishing Travers' kin had made it instead of Disney's, if only to get a less biased viewpoint. As it is we're left with a work wherein Emma Thompson, one of the modern day greats, plays one note (bitch) for an hour and a half, and another ("I'm sorry, you were right, Unca Walt.") for the last half hour. And she's the lucky one. Tom Hanks only gets one note to play ("I'm a good guy trying to put up with you, you bitch.") It's uninspired to say the least and the reason the work disappeared as quickly as it did. Colin Farrell, Rachel Griffiths (who I love), et al? Woefully unused. This is ONLY for the unabashed Disney fan, or as an glaring example of how money ultimately writes history.

Glacial story development, and just down-right dull. Not a single noteworthy performance. How can a movie about a musical be so one-note? It may have taken Disney 20 years to make the "Mary Poppins" film -- and I felt each minute of the wait watching this snoozer.