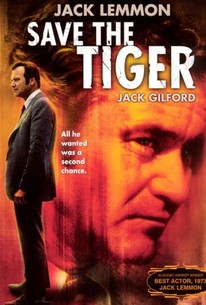 Star Jack Lemmon was so eager to see Save the Tiger make it to the big screen that he waived his salary rather than have the film exceed its tiny budget. Lemmon portrays "the great American tragedy" as upwardly mobile garment manufacturer Harry Stoner, whose underhanded business tactics are beginning to catch up with him, and whose keeping-up-appearances lifestyle has forced him into bankruptcy. The script, by producer Steve Shagan, does nothing to endear us to Stoner: he flagrantly cheats on his wife, arranges business deals by servicing his clients with prostitutes, and finally agrees to torch his warehouse to collect the insurance money, all the while paying empty lip service to his lost ideals. Nonetheless, one "feels" for Stoner throughout, especially when he breaks down while giving a speech to his assembled buyers, imagining that the audience is populated by his dead army buddies, who gave up their lives to make the world safe for good-for-nothings like himself. Lemmon's performance won him an Academy Award. Appearing in supporting roles are Jack Gilford as Lemmon's conscience-stricken partner and Thayer David as a smarmy arsonist.

Lara Parker
as Margo the Prostitute

Madeline Lee
as Receptionist
View All

Critic Reviews for Save the Tiger

Save the Tiger is essentially a virtuoso piece of movie acting. Jack Lemmon holds the movie together by the sheer force of his performance as Harry; he makes this character so convincing that we're fascinated.

[Save the Tiger], despite its flaws, stands as a remarkable achievement for its writer, Steve Shagan; its director; and, perhaps above all, its star, Jack Lemmon.

In the phony moral quagmire of Save the Tiger Jack Lemmon tugs at our heart strings while never letting go of his purse strings ...

Jack Lemmon won the 1973 Best Actor Oscar in John Avildsen's Arthur Miller-like sentimental melodrama, in which he plays a bitter down-on-his-luck L.A. businessman who feels cheated by the American Dream.

A great film of uncommon truth.

Lemmon turns in showy, theatrical work that's appropriate to the not-terribly subtle film around him, but the whole enterprise is one that's best avoided...

Audience Reviews for Save the Tiger

A tour de force for Lemmon. Consider this to be a bridge between the early great comedic work and the really marvelous dramatic work of his later career.

Set fire to the factory. Supply women for the clients. Harry Stoner will do anything to get one more season.

The greatest performance ever given by an actor and Jack Lemmon delivers this in his breathtaking Oscar winning role. One of the top ten best films of 1973.

Save the Tiger Quotes