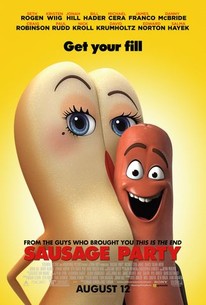 Critics Consensus: Sausage Party is definitely offensive, but backs up its enthusiastic profanity with an impressively high laugh-to-gag ratio -- and a surprisingly thought-provoking storyline.

Critics Consensus: Sausage Party is definitely offensive, but backs up its enthusiastic profanity with an impressively high laugh-to-gag ratio -- and a surprisingly thought-provoking storyline.

Critic Consensus: Sausage Party is definitely offensive, but backs up its enthusiastic profanity with an impressively high laugh-to-gag ratio -- and a surprisingly thought-provoking storyline.

A misplaced sausage and his savory friends embark on an existential adventure through the aisles of a massive supermarket in this raunchy animated comedy from Seth Rogen and Evan Goldberg. As the store's annual 4th of July sale draws near, the perishable pals must return to their rightful places on the shelves before the customers come flooding in to fill their carts. Conrad Vernon (Monsters vs. Aliens) takes the helm for this Sony Pictures/AnnaPurna Pictures co-production penned by Rogen, Goldberg, Kyle Hunter, and Ariel Shaffirwhich. ~ Jason Buchanan, Rovi

A movie so bizarre, so profane and so quietly virtuous that it works.

The film... very quickly passes its sell by date.

What should have been a shamelessly filthy stoner movie has been watered down with ill-judged, undergraduate musings on religion, philosophy and race.

Re-watch value is extremely low with this one.

This is one animated film that is not for children. Fans of the Rogen/Goldberg flavor of raunchy comedy, however, will find that Sausage Party is the duo's greatest achievement.

It somehow manages to shock despite the lines Rogen and Goldberg (who helped write the screenplay) have crossed before in Superbad and This Is the End.

This is a film to see with friends who are game for an explicite but smart and clever movie.

In addition to the originality of the proposal, its irreverent spirit or the inevitable parodies and references, one of its biggest hooks is the vocal cast, which bring nuances and humor to its characters. [Full Review in Spanish]

Its jokes raise smiles and their journey through the more corrosive side of humor makes it easy for us to buy the idea, but watch out, the expiration date is not very far. [Full Review in Spanish]

A deliciously offensive animation for adults that mocks with surprising intelligence the stupidity of prudishness and unfounded beliefs - and it looks great for a movie that is so inexpensive and benefits from some superb voicing (like Edward Norton imitating Woody Allen).