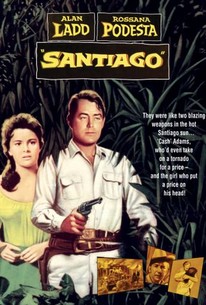 Set during Cuba's struggle to free itself from colonialist Spain, this exciting adventure chronicles the exploits of a tough, mercenary gun runner who learns about honor, sacrifice and caring for others when he ends up forced to smuggle his latest weapon's cache aboard a beat up stern wheeler bound for Cuba. There he meets a beautiful freedom fighter who has been in the States trying to rally her expatriot colleagues into returning to join in the battle. It is she, with her passionate idealism and unwavering courage, who turns the gunrunner's life around. ~ Sandra Brennan, Rovi

Marvin Miller
as Narrator
View All

There are no critic reviews yet for Santiago. Keep checking Rotten Tomatoes for updates!

There are no featured reviews for Santiago at this time.