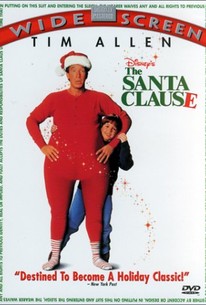 Critics Consensus: The Santa Clause is utterly undemanding, but it's firmly rooted in the sort of good old-fashioned holiday spirit missing from too many modern yuletide films.

Critics Consensus: The Santa Clause is utterly undemanding, but it's firmly rooted in the sort of good old-fashioned holiday spirit missing from too many modern yuletide films.

Critic Consensus: The Santa Clause is utterly undemanding, but it's firmly rooted in the sort of good old-fashioned holiday spirit missing from too many modern yuletide films.

Television sitcom star Tim Allen made his big screen debut with this light, family-friendly holiday comedy. Allen stars as Scott Calvin, the divorced dad of Charlie (Eric Lloyd). Scott is distressed to learn that his ex-wife Laura (Wendy Crewson) and Charlie's psychiatrist stepfather Neal (Judge Reinhold) have informed his son that there is no Santa Claus. While a sullen Charlie visits his dad on Christmas Eve, a noise on the roof brings them outside, where Scott startles the intruder, who tumbles from the roof. It turns out that there is a Santa after all, and Scott has just accidentally killed him. Because of a legal technicality known as "the Santa clause," Scott inherits the jolly old elf's job. As the next year passes, Scott rapidly gains weight, grows a white beard and meets the elf Bernard (David Krumholtz) -- who is the one who really runs the North Pole -- while Charlie regains his Christmas spirit. However, Neal becomes concerned about Scott's sudden change in appearance and insistence that he's Santa, and he forces him to undergo a psychiatric evaluation. Director John Pasquin previously directed Allen in the TV series Home Improvement and would team with him again for Jungle 2 Jungle (1997).

Azura Bates
as Elf in Hangar

Brett Moon
as Elf One

Jack Newman
as Santa In Street

Micha Jackson
as Child One

News & Interviews for The Santa Clause

View All The Santa Clause News

Critic Reviews for The Santa Clause

This is Allen's movie debut, and it's easy to see why his show is a ratings smash. There's an effortless quality to his humor, but it's also got a quietly urgent edge to it.

I was surprised to find The Santa Clause rather easier to take than anticipated.

You can get the same emotional and imaginative kick staying home and rereading your Christmas cards.

Weird, confusing, and there are just so many questions.

Wild, disturbing, and it made no sense.

The Santa Clause is a failure as a holiday movie. It promotes negative aspects of the season and attempts to have you cheer for disgusting, irritating people.

A funny, warm and inventive Christmas film that proves seeing is not believing -- believing is seeing.

Is it just me, or is this whole idea on the sick side? Imagine how uncomfortable this jolly little yarn would be for divorced parents and their children.

Tim Allen made his feature debut in this engaging yuletide comedy, which is likely to appeal to the whole family and brims over with plenty of good ideas.

Audience Reviews for The Santa Clause

A divorced adman for a toy company finds himself in quite a jam after a rooftop mishap on Christmas Eve sees him become Santa Claus, much to the delight of his son Charlie, and the absolute befuddlement/horror of his co-workers, ex-wife and her new man, a skeptical psychologist. This mostly holds up pretty good, and Tim Allen is pretty funny, but the cheesiness of a lot of it wears thin after a while. I do like this movie, and the effects are well done, but this is neither one of the best nor my favorite holiday films. The concept sure is fun, though, and the music is quite swelling and wonderful at times.

The Santa Clause is a fun kids movie with a few jokes adults will enjoy, its not really a Christmas classic but its fun many people can enjoy.

As a Christmas film, The Santa Clause for me anyways didn't work. I felt that the film was a dud. Of all the Christmas themed movies, The Santa Clause is one of the worst. I feel that the film hasn't aged well, and though it's a great film to watch as a kid, later on you realize how stupid and pointless this film really is. I don't like the film now, and I find it to be too bad to actually enjoy today. I can think of many Christmas films that are better than this one. Tim Allen usually is pretty funny, but in this film, he seems tired and bored. The film didn't hold up for me, and I found it quite forgettable after viewing it a few times. The film is not as terrific, spectacular or original as everyone claims it to be. For a family film, it's mediocre; there are better films out that the family can enjoy on Christmas. I just felt that the idea behind the story lacked something really great to make this film work. The film hasn't stood the test of time, and the material on-screen is tired and old, and gets annoying after a few viewings. I'll stick with Scrooge and A Christmas Vacation, thank you very much. At least those films have stood the test of time, and are always entertaining, but the Santa Clause is tired, annoying and poorly acted. A pretty bad Christmas film, I honestly don't see what the fuss is about.

It was an interesting and funny idea to have a normal guy put into the situation of having to become Santa, but if you ask me, this movie overdoes it. The whole idea that he would have to physically transform into Santa is stupid. Of course, as I kid I enjoyed this movie anyway, but it's not one of the better Christmas movies out there.