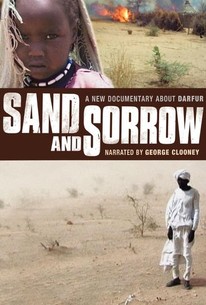 Peabody Award-winning filmmaker Paul Freedman directs this sobering documentary about the genocidal crisis in the Darfur region of Sudan. Freedman followed a group of African Union peacekeeping forces on a journey through the area, observing the 2.5 million people displaced from their homes by brutal violence, and forced to stay in the squalor of temporary camps. Analyzing the cultural, political, and historical background of the area, the film examines how the government in Sudan was able to turn so ruthlessly against its own indigenous people, creating what would most likely go down in history as one of humanity's most shameful moments.

George Clooney
as Narrator
View All

Critic Reviews for Sand and Sorrow

There are no critic reviews yet for Sand and Sorrow. Keep checking Rotten Tomatoes for updates!

Audience Reviews for Sand and Sorrow

There are no featured audience reviews yet. Click the link below to see what others say about Sand and Sorrow!