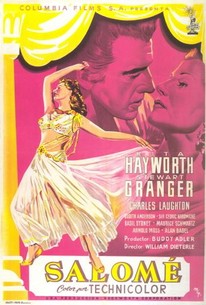 "Her Salome Will Steal Your Breath Away" was the classic advertising slogan attached to this opulent Rita Hayworth epic -- a slogan which became laughable whenever a radio announcer would mispronounce Salome as "salami." Using the very sketchy Biblical story of the death of John the Baptist as its springboard, Salome depicts its title character, the stepdaughter of King Herod, as a victim of circumstance rather than a wanton temptress. Banished from Rome because of an unfortunate romance with the nephew of Caesar, Salome (Rita Hayworth) declares that all men are her enemies, but her resolve weakens when she falls in love with Claudius (Stewart Granger), the military commander of Galilee. Meanwhile, Salome's wicked mother, Herodias (Judith Anderson), plots the demise of John the Baptist (Alan Badel), who currently enjoys the protection of the superstitious Herod (Charles Laughton). At this point, the story departs radically from Scripture. Salome is no longer coerced by Herodias to demand the head of John the Baptist; instead, Herodias, on her own, promises Herod that Salome will perform the "Dance of the Seven Veils" for him -- but only if he beheads John first (Salome has been misinformed that the dance will save John from the headsman's sword). Somehow, scriptwriter Jesse Lasky Jr. even manages to concoct a happy ending for poor Salome, which is a lot more than Oscar Wilde or Richard Strauss were able to do. Considered an artistic flop in 1953, Salome seems somewhat better today, if only because of that powerhouse cast.

Alan Badel
as John the Baptist

Mickey Simpson
as Herod's Captain of the Guards

Guy Kingsford
as Officer
View All

Sex and religion, with more emphasis on the latter, are awkwardly but handsomely blended in a surprising version of the scriptural tale.

It's pure Hollywood bunk, that's great on pomp, splendor, costumes and lush Technicolor, but short on being convincing.

Colorful falsehood with a saucy Rita as well as a match up of those two great actors/hams Charles Laughton & Judith Anderson. Granger is suitably strong & full of rectitude but Alan Badel gives an overblown, operatic performance as John the Baptist.