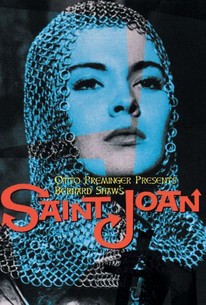 After an extensive talent search, producer-director Otto Preminger selected a 17-year-old unknown from Iowa, Jean Seberg, to play Joan of Arc, a role traditionally portrayed by actresses twice to three times Seberg's age. Seberg is cast opposite such venerable pros as Richard Todd (as Dunois), Anton Walbrook (the Bishop of Beauvais), John Gielgud (Earl of Warwick) and Felix Aylmer (The Inquisitor). Cast as the vacillating Dauphin is Richard Widmark. Graham Greene's screenplay refashions the original Shaw text in the form of a flashback. Seberg eventually became an accomplished actress by virtue of her appearances in such nouvelle vague films as Breathless, but it was too late to salvage Saint Joan, which was figuratively burned at the stake by critics and filmgoers alike. ~ Hal Erickson, Rovi

Jean Seberg
as Joan of Arc

Richard Widmark
as Charles the Dauphin

John Gielgud
as Earl of Warwick

Felix Aylmer
as The Inquisitor

Finlay Currie
as The Archbishop of Rheims

Bernard Miles
as The Master Executioner

Mr. Preminger, his scenarist and his cast, who obviously were serious in tackling an important drama, have only fashioned a series of dissertations on an important theme.

Even hardcore Preminger fans number this stage adaptation among his lesser works.

One of Otto Preminger's most underrated features.

Preminger's version of Bernard Shaw's play about the Maid of Orléans is much less impressive than the months of thunderous ballyhoo that heralded it.

The endless talk is of institution vs. individual, Church vs. the girl's "heretical" voices-visions, France vs. Burgundy vs. England, at the molasses pace of a celluloid lecture.

A work about Seberg -- a document on a restless, rebellious performer who, like her character, found herself trapped in a role

The fervor of the child-soldier is lost on the screen; she appears to be sweet and naive, not the calculating personality Shaw intended and wrote of in the play's prolog.

The then unknown Seberg in the central role is surrounded by an eminent cast, many of whom act as badly as she but seem above criticism.

Hollywood adaptations of plays rarely come off much worse than this B&W one did.

Even though I couldn't understand much of it (because of my non-existing historical knowledge about Joan of Arc), I found this one pretty suspenseful and enjoyably. Great acting, photography and music.

This version of Joan of Arc is adapted from the George Bernard Shaw play, unfortunantely it doesn't work 100% in it's adaption to the screen. Jean Seberg takes the role of Joan. Seberg looks great and does a fare job seeing as she has little action to work with. The story is told in flash back and basically consists of two acts (based on the original acts of the play). The first act being the events of crowning the Dauphin and leading the French army at Orleans, and the second Joan's trial and execution. The main problem I found with this is that there is so little action, just when you think that something exciting is going to happen, like the battle at Orleans, it fades to black and switches to scenes after the event. This is a fairly enjoyable film, with a good cast, but there are superior movie versions of the story.

[font=Century Gothic]In "Saint Joan," Joan(Jean Seberg) is a 17-year old peasant who calmly informs the local official, Baudricourt(Archie Duncan), that she has been receiving instructions from saints telling her to dress like a soldier, lift the siege of Orleans from the English and that the Dauphin(Richard Widmark) be crowned king. Sensing that they have nothing to lose, he sends her off with a letter of introduction to the royal court. They hesitate in admitting her until she accurately predicts a soldier's death. And picking the Dauphin out of a crowd does not hurt either...[/font] [font=Century Gothic][/font] [font=Century Gothic]Written by Graham Greene(based on the play by George Bernard Shaw) and directed by Otto Preminger, "Saint Joan" is a very intelligent movie with excellent performances from John Gielgud and Richard Widmark, who is cast so far against type that it made my head spin. The movie has a surfeit of ideas but stints on the drama which takes away from understanding Joan's appeal and spirituality. Plus, there are no battle scenes, even with the infamous burning scene as the climax of the film. [/font] [font=Century Gothic][/font] [font=Century Gothic]The central conflict is one of faith versus religion and how they are not always the same thing. And there is a very interesting conversation about torture which is relevant especially in these times. Speaking of an idea ahead of its time, Joan is adamant in dressing as a man and wanting to be a solider, instead of a wife and mother, one of the offenses she is indicted for.[/font]