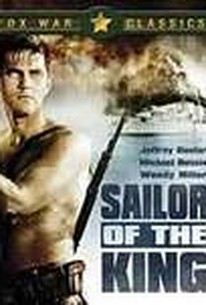 Jeffrey Hunter plays a young British sailor, the out-of-wedlock son of a high-ranking naval officer (Michael Rennie). Hunter's ship is torpedoed, leaving him stranded on a German-occupied island. Armed with only a rifle, Hunter is able to shoot at a German cruiser docked for repairs, and to slow down its departure. The British Navy then moves in and sinks the ship. Hunter is decorated for valor by the squadron commander--his own father. Though set during World War II, Sailor of the King was adapted from C. S. Forester's World War I novel Brown on Resolution (previously filmed in 1935, with John Mills in the lead). This 1953 20th Century-Fox production was released in Britain as Single Handed. ~ Hal Erickson, Rovi

Critic Reviews for Sailor of the King

A tacked-on prologue and an equally synthetic conclusion are oddly out of key with the stirring simplicity of the central story...

Audience Reviews for Sailor of the King

There are no featured audience reviews yet. Click the link below to see what others say about Sailor of the King!

Sailor of the King Quotes