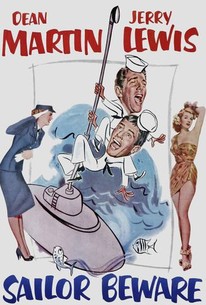 Sailor Beware is a loose remake of two previous Paramount films, Here Come the Waves and Lady Be Careful (all three films were based on the same 1933 stage play). Dean Martin and Jerry Lewis star as sailors Al Crowther and Melvin Jones, who indulge in all sorts of zany antics while serving Uncle Sam. Al spends most of his time trying to melt down the resistance of "ice princess" Corinne Calvet (playing herself), while poor Melvin is happy just to get through the day. Highlights include a riotous boxing sequence, with puny Melvin pitted against a gargantuan opponent, and an extended parody of radio quiz shows. Like Abbott and Costello before them, Martin and Lewis found it expedient to rely on service comedies during their formative movie-star years: Sailor Beware was filmed after At War With the Army and just before Jumping Jacks. Betty Hutton makes a guest appearance at the beginning and end of the film as an old flame named Hetty Button (sic).

Corinne Calvet
as Herself

Bobby Mayo
as Himself

Eddie Mayo
as Himself

There are no critic reviews yet for Sailor Beware. Keep checking Rotten Tomatoes for updates!

There are no featured audience reviews yet. Click the link below to see what others say about Sailor Beware!