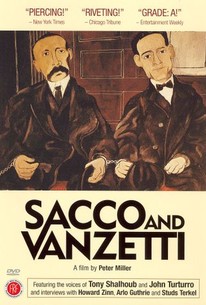 Critics Consensus: Engrossing and enraging, Sacco and Vanzetti exhumes an infamous judicial failure with a painful amount of modern relevance.

Critics Consensus: Engrossing and enraging, Sacco and Vanzetti exhumes an infamous judicial failure with a painful amount of modern relevance.

Critic Consensus: Engrossing and enraging, Sacco and Vanzetti exhumes an infamous judicial failure with a painful amount of modern relevance.

"Sacco and Vanzetti" tells the story of Nicola Sacco and Bartolomeo Vanzetti, two Italian immigrant anarchists who were accused of a murder in 1920, and executed in Boston in 1927 after a notoriously prejudiced trial. It is the first major documentary film about this landmark story. The ordeal of Sacco and Vanzetti came to symbolize the bigotry and intolerance directed at immigrants and dissenters in America, and millions of people in the United States and around the world protested on their behalf. Nearly 80 years later, the story continues to have great resonance, as America once again grapples with issues of civil liberties and the rights of immigrants.

Critic Reviews for Sacco and Vanzetti

Nicola Sacco, Bartolomeo Vanzetti, and the incredible firestorm of outrage generated by their criminal trials have been largely neglected in recent years, but Peter Miller's absolutely engrossing documentary Sacco and Vanzetti brings it all back.

The meat-and-potatoes style of Sacco and Vanzetti seems less a failure of imagination than a means of putting in the foreground its intriguing subject matter.

Miller, a New Yorker, uses archival footage, dramatized readings and talking heads, including Sacco's niece and a neighbor of Vanzetti's, to get his point across.

[Pic] does a superb job of condensing an overwhelming mass of documentation, archival imagery and artistic representation into a concise yet passionate history lesson whose relevance could not be timelier.

Only 81 minutes long, Sacco and Vanzetti is packed with information.

A long-held cause celebre for leftists the world over, the story of immigrant activists Sacco & Vanzetti is told in Peter Miller's rote documentary as a reference point for the way immigrants are still mistreated in America.

Surprisingly, this is the first nonfiction film to tackle the subject and Miller manages to find the parallels to contemporary times without being too pedantic or heavy-handed.

But even those who might feel that the movie presents a one-sided view of the evidence would have to admit that the trial was a travesty.

A knee-jerk take that may touch many hearts but does not feed or satisfy the mind.

With cases of such importance, it's always a good idea to be reminded every now and then as to how things can go wrong, and justice means that just because a person is guilty of SOMETHING, doesn't mean that it's okay for the State frame them for something

Watching the film, it's hard not to feel a cold chill of recognition, particularly when Miller's interviewees discuss immigration, patriotism and war, and civil liberties versus homeland security in a time of national crisis.

Audience Reviews for Sacco and Vanzetti

A solid documentary about one of the worst miscarriages of justice in American history.

[font=Century Gothic]"Sacco & Vanzetti" is an informative documentary about Nicola Sacco and Bartolomeo Vanzetti, two immigrants and anarchists who were railroaded for a murder and robbery that happened near Boston in 1920 and executed in 1927.(Even though I heard of them, the particulars of the case were unfamiliar to me until now.) While borrowing too much from the Ken Burns school of documentary filmmaking(admittedly it does open it up a little but the music is definitely overkill), the documentary does an adequate job of linking their case to today via the immigrant issue and the war on terror. But regrettably it does not do the same with the death penalty and there is little information on anarchism as a philosophy. No matter how far we have come as a nation, it always seems like there is always more work to be done. [/font]