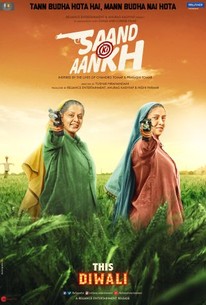 Before 1998, Johri village in the interiors of Uttar Pradesh was just like any other village in India. But during this time something extraordinary started, which took this village to national and international levels of success and fame. As a result of which this village had become an inspiring example for the entire nation. At the age of 60 they picked up a gun for the sake of their daughters in the hopes of encouraging them towards a bright future. They did not want their daughters to share the same fate of a lifetime of suppression. What unfolded was nothing short of miraculous. They discovered their own skill of being exceptional shooters. Despite all the odds, they won 352 medals each in the course of their veteran professional life as a shooter.

This feels like a waste of rich narrative possibilities, as mechanically feelgood as those two dozen Britflicks that have cast Dames Dench, Smith et al as old dears who shoot from the lip.

[A] solidly entertaining piece of "girl power" masala that I found roundly engaging and worth a watch.

As good as Saand Ki Aankh may be (which is about half good), practices like this shouldn't be supported, and this is coming from Anurag Kashyap's biggest fan.

The powerful dialogue, the heart-wrenching scenes among the female characters and the wonderful depictions of the grandmothers getting to grips with modern life add so much to the film...

Watch the film for the real-life drama, as well as for its affirmative message towards women empowerment.

The film drives home the point of women empowerment, celebrates the bonhomie among women wholeheartedly, and attempts at every point to hit the bull's eye.

Harshada Rege
The Times of India

Pannu and Pednekar are wonderful and spunky and embrace their parts even though their body language and posture is variable. Bakshi and Arjun provide admirable support.

Taapsee Pannu and Bhumi Pednekar's body language is wrong. Their faces are made old by latex, but their hands and necks are young. Crucially, at no point do they make us suspend disbelief.

It's a simple, straightforward story in essence. I wish it wasn't so simplistic in its telling.

Taapsee Pannu and Bhumi Pednekar have a winner on their hands in this inspiring story about two women who take on patriarchy.

Given the task of playing women double their age, Pannu and Pednekar come up trumps in their turn as cheery, fire-breathing warriors.

There are no featured reviews for Saand Ki Aankh at this time.