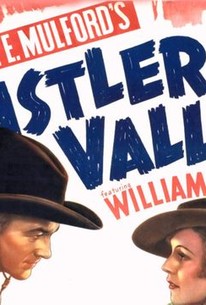 After several overlong "Hopalong Cassidy" westerns, Rustler's Valley brings things back under control with a short-and-sweet running time of 58 minutes. William Boyd, George "Gabby" Hayes and Russell Hayden are back respectively as Hoppy, Windy and Lucky. This time, a powerful railroad tycoon frames an innocent young man on a robbery charge. The villain is in cahoots with an equally unscrupulous lawyer, played by Stephen Morris (better known as Morris Ankrum). With Hopalong Cassidy on the job, however, the baddies are foiled in near-record time. Of interest is the fact that the rail baron is played by 26-year-old Group Theatre veteran Lee J. Cobb, a full decade before his stage triumph in Death of a Salesman. Rustler's Valley comes to a thrilling climax as a rock-slide wipes out the remaining villains, a sequence later excerpted in toto in the 1942 Hopalong Cassidy oater Lost Canyon.

Horace B. Carpenter
as Party Guest

There are no critic reviews yet for Rustler's Valley. Keep checking Rotten Tomatoes for updates!

There are no featured reviews for Rustler's Valley at this time.