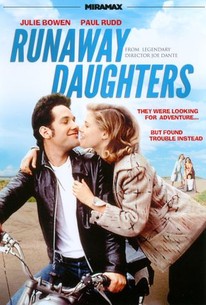 Some teen girls take to the road in this made-for-cable remake of the 1956 original. Set in 1957, three guy-crazy friends take to the road in a stolen car, trying to track down one of their ex-lovers before he goes off into the Navy. The film was part of Showtime's "Rebel Highways" series of remakes.

There are no featured reviews for Runaway Daughters at this time.