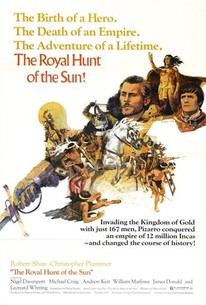 Royal Hunt of the Sun Photos

Historical accuracy is cast aside in the film version of Peter Shaffer's play. Fueled by promises of gold, Pizarro (Robert Shaw) and his explorers make a third trip across the treacherous Andes Mountains to Peru. There they meet King Atahuallpa (Christopher Plummer), considered to be a god by his faithful followers. The two leaders overcome their initial mistrust and suspicion, garnering admiration for each other. When the King is sentenced to die, Pizarro tries unsuccessfully to prevent the monarch's death at the hands of gold-hungry explorers.

Critic Reviews for Royal Hunt of the Sun

Audience Reviews for Royal Hunt of the Sun

worst casting in history? maybe. robert shaw as pizarro and christopher plummer as the inca emporer atahualpa! am i the only one who saw this bizarre picture?

Royal Hunt of the Sun Quotes