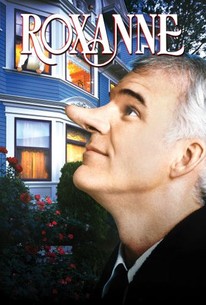 Critics Consensus: Though its sweetness borders on sappiness, Roxanne is an unabashedly romantic comedy that remains one of Steve Martin's funniest.

Critics Consensus: Though its sweetness borders on sappiness, Roxanne is an unabashedly romantic comedy that remains one of Steve Martin's funniest.

Critic Consensus: Though its sweetness borders on sappiness, Roxanne is an unabashedly romantic comedy that remains one of Steve Martin's funniest.

This modernization of Edmond Rostand's Cyrano de Bergerac casts Steve Martin as C. D. Bales, the fearless, quick-witted fire chief of a Washington State resort town. Bales' most trusted fireman is the handsome but tongue-tied Chris McDonell (Rick Rossovich). Both men are in love with the beautiful Roxanne Kowalski (Darryl Hannah), but Bales, adorned with a huge nose that makes Bob Hope look like Nanette Fabray, is convinced that he's too homely to win Roxanne's heart. Thus, in the self-sacrificing tradition of Cyrano de Bergerac, Bales courts Roxanne vicariously by feeding his rival Chris the proper romantic words and phrases. The inherent pathos in Roxanne is offset by moments of slapstick, notably the scene wherein C. D. Bales vanquishes a pair of hooligans with a tennis racket. Steve Martin himself is credited with the screenplay for Roxanne, though he generously cites Edmond Rostand as his inspiration.

Caroline Barclay
as Girl in Street

Heidi Sorensen
as Trudy
View All

Light and likable, with hearts unabashedly all over its sleeves, Roxanne is a winning romantic comedy whose appeal should cross age barriers and backgrounds -- giving it an across-the-board promise.

It's a neat trick, being Steve Martin. He's so good; his movies will get even better.

In the end it's hopelessly sappy stuff.

The nose itself is a perfect prop for a man who began his career with a fake arrow through his head, a man who has since evolved from a coolly absurdist stand-up comic to a fully formed, amazingly nimble comic actor.

Martin claims to have written 25 script drafts for this film, which indicates the uphill trudge he faced...what he has produced is Steve Martin playing a nice 'n' wacky guy in a sappy story.

It manages to entertain. [Full Review in Spanish]

Martin is very funny in the role, and most ingenious about finding modern equivalents for the various bits of business in the original play. Yet the nagging question remains: Why?

Roxanne has a way of making you feel good even though you know it may be the corniest movie you've seen. Filled with romance, from its plot to the scenery, Roxanne makes no apologies for its sweet fervor.

...an entertaining yet undeniably forgettable romcom that benefits substantially from the stars' charismatic work.

This modern version of the classic Cyrano de Bergerac tale about the man with the long nose and great wits found the perfect leading man in Steve Martin. He fills his protagonist with enough charm, charisma and arrogance to make the movie work even through a few rather sappy parts. The best moments are those of the small ideas, like lovably chaotic fire department or the fact that Chris climbs houses like an athlete. Even though Hannah does not exactly make for a convincing object of desire with her desperate need for romance, the film easily maneuvers through the weak parts thanks to its leading man and plenty of good and lovable jokes. Another big asset is the setting, an adorable mountain town that works wonders for the movie's atmosphere. They just don't make such comedies anymore.

Somehow I'd never gotten around to seeing this movie until now, but I guess I wasn't missing much. Rossovich is too over-the-top stupid to fit the tone of the rest of the film, the dialogue and directing are sloppy, the acting is pretty mediocre all around, and Daryl Hannah?? How she is cast as this gorgeous object of affection baffles me. Slim pickings in that town, I guess. The acrobatics, the sniffing out fires with his nose.... it's all just trying too hard.

The perfect foray into romance and intellectual thinking.