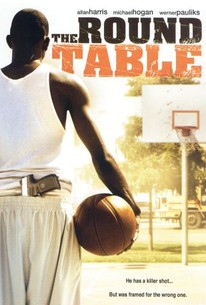 A star athlete with a promising future must prove his innocence after becoming the prime suspect in a murderous crime spree in this urban thriller from filmmaker Paul W.L. McDaniel. Lucky Sanderson is a wiz on the basketball court and a key member of the community, but when a key witness to a brutal murder singles out Lucky as the man responsible for the heinous crime, his easy life of fast cars and adoring girls turns to an inescapable nightmare from which he may never escape. With a death sentence looming over his head and time running out fast, Lucky must enlist the help of his police detective cousin in uncovering a conspiracy that points all the way from a vengeful street gang to the highest ranks of the police department.

Critic Reviews for The Round Table

There are no critic reviews yet for The Round Table. Keep checking Rotten Tomatoes for updates!

There are no featured reviews for The Round Table at this time.

The Round Table Quotes