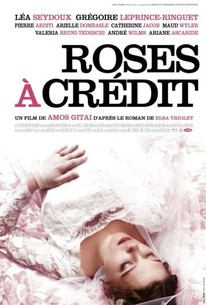 Israeli filmmaker (Amos Gitai) travels to France for this drama of a woman whose life is taken over by greed. Marjoline (Lea Seydoux) and Daniel (Gregoire le Prince) get married in the 1940s as France is still struggling with the aftermath of World War II. Daniel works in horticulture and is trying to develop a new strain of roses; Marjoline, meanwhile, is tired of the wreckage war had made of their town and wants more new things than their budget can afford. Marjoline decides to buy a new car on credit, but the luxury auto isn't enough for her; she likes to sit in the car and listen to commercials for products that she'd like to own but Daniel's salary won't permit her to have. As the 1940s give way to the 1950s, Marjoline's lust for consumer products doesn't fade, and as she charges the things she wants, the couple digs themselves deeper into debt with no end in sight. Adapted from a novel by Elsa Triolet, Roses a Credit (aka Roses On Credit) received its North American premiere at the 2010 Toronto International Film Festival.

There are no critic reviews yet for Roses à crédit. Keep checking Rotten Tomatoes for updates!

There are no featured reviews for Roses à crédit at this time.