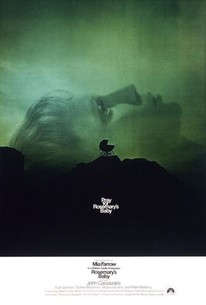 Critics Consensus: A frightening tale of Satanism and pregnancy that is even more disturbing than it sounds thanks to convincing and committed performances by Mia Farrow and Ruth Gordon.

Critics Consensus: A frightening tale of Satanism and pregnancy that is even more disturbing than it sounds thanks to convincing and committed performances by Mia Farrow and Ruth Gordon.

Critic Consensus: A frightening tale of Satanism and pregnancy that is even more disturbing than it sounds thanks to convincing and committed performances by Mia Farrow and Ruth Gordon.

In Roman Polanski's first American film, adapted from Ira Levin's horror bestseller, a young wife comes to believe that her offspring is not of this world. Waifish Rosemary Woodhouse (Mia Farrow) and her struggling actor husband, Guy (John Cassavetes), move into the Bramford, an old New York City apartment building with an ominous reputation and only elderly residents. Neighbors Roman and Minnie Castevet (Sidney Blackmer and Ruth Gordon) soon come nosing around to welcome the Woodhouses to the building; despite Rosemary's reservations about their eccentricity and the weird noises that she keeps hearing, Guy starts spending time with the Castevets. Shortly after Guy lands a plum Broadway role, Minnie starts showing up with homemade chocolate mousse for Rosemary. When Rosemary becomes pregnant after a mousse-provoked nightmare of being raped by a beast, the Castevets take a special interest in her welfare. As the sickened Rosemary becomes increasingly isolated, she begins to suspect that the Castevets' circle is not what it seems. The diabolical truth is revealed only after Rosemary gives birth, and the baby is taken away from her. Polanski's camerawork and Richard Sylbert's production design transform the realistic setting (shot on-location in Manhattan's Dakota apartment building) into a sinister projection of Rosemary's fears, chillingly locating supernatural horror in the familiar by leaving the most grotesque frights to the viewer's imagination. This apocalyptic yet darkly comic paranoia about the hallowed institution of childbirth touched a nerve with late-'60s audiences feeling uneasy about traditional norms. Produced by B-horror maestro William Castle, Rosemary's Baby became a critically praised hit, winning Gordon an Oscar for Best Supporting Actress. Inspiring a wave of satanic horror from The Exorcist (1973) to The Omen (1976), Rosemary's Baby helped usher in the genre's modern era by combining a supernatural story with Alfred Hitchcock's propensity for finding normality horrific. ~ Lucia Bozzola, Rovi

Floyd Mutrux
as Man at Party

Josh Peine
as Man at Party

The fault ultimately is in the Polanski screenplay which overlooks character for effect, disastrously. Involvement is absent; all is surface and it is a smooth one, without the shimmer of the evil that is within.

Right to its bitter end, there is no escaping "Rosemary's Baby." On film Ira Levin's best selling novel is as horribly frightening as it was on paper.

Rosemary's Baby is suffused with Polanski's style and preoccupations.

Even readers of the book who know how Baby comes out are in for a pleasant surprise: the very real acting ability of Mia Farrow.

Polanski worked with an elegant restraint that less talented filmmakers have been trying to mimic ever since.

One of the finest horror films ever made.

Does Polanski have to show us Satan walking around like some RKO matinee monster in a corny dream sequence right out of Juliet of the Spirts?

How reassuring, really, to find a moderately sophisticated film where the colors are black and white again instead of that infuriating grey, where the evil is NOT banal but truely hellish.

Polanski is less interested in terror and shock than in creating a mood of paranoia and instability. He finds the eerie in the mundane...

One of the best-shot, best-scored, and best-acted supernatural thrillers ever made.

It's one of the most powerful films ever made about Devil worship because Polanski expertly winds up the paranoia with spooky atmospherics and morbid humour.

An excellent and unsettling supernatural thriller in which paranoia grows in a maddening crescendo, and the most ironic is how Polanski made Repulsion and this film (both about rape and women getting horrendously abused) before being convicted of raping a minor years later.

A taut psychological thriller with visceral cinematography and a haunting atmosphere. One of the bests in its' genre.

Mrs. Gilmore: We're your friends, Rosemary. There's nothing to be scared about. Honest and truly there isn't!  "Pray for Rosemary's Baby." I've seen Rosemary's Baby twice now and with a second viewing, the film was easily able to reinforce it's elite status among the horror classics. This movie is easily in the top 5 of all-time horror films. It's up there with Psycho, The Omen, and Halloween. It's a masterpiece of suspenseful horror, where the scares aren't in your face with jump scares and tons of blood. This movie relies more on atmosphere, music, and pure creepiness, which makes for a more interesting time then the standard horror film.  Rosemary moves into a new apartment in New York with her actor husband. They are planning on trying to have a baby soon, and then begin to get close with their neighbors. A young woman who Rosemary had met in the laundry room, that lived with the old neighbors kills herself. When Rosemary becomes impregnated but doesn't remember the night, she begins wondering how she came to be pregnant. Then she begins to get terrible pains and the doctor she was recommended isn't doing much to help her. All of this leads up to an ending that makes for one of the best endings in horror history. It was heavily influential for movies like The House of the Devil. Rosemary's Baby has obviously been classified as one of horror's most influential and classic films. I am still a believer that this is Roman Polanski's greatest film. Also Mia Farrow makes for a perfect paranoid, pregnant mother. It's up there with the best work of her career as well. Everything in this movie is just about perfect. It's a beautiful film. The cinematography is wonderful, the score is perfect, and the atmosphere over powering. It's really a film buffs horror film, much in the vain of say, The Shining. This is a must watch classics and a film that has stood the test of time. Rosemary's Baby showed the world that you could really on purely atmosphere and still bring the scares, just not in typical ways. It's truly one of my favorite horror films of all-time and just a masterpiece of cinema period.

Rosemary's Baby is one of most memorable horror classics ever filmed. Roman Polanski's film is the film responsible for many of the films dealing with the devil, most notably The Exorcist and The Omen. The first time I watched this film, I thought it was overhyped. I didn't understand why this film had gotten the praise it received . I needed to watch this film a second time to make a more definitive opinion on this film. Watching this a second time around I loved it a lot more, and thought it deserved the classic status it has received. This is a must watch for every serious horror fan. This is a film that delivers the chills that is expected. Rosemary's Baby is a powerful horror film that truly redefined the genre. The film has a terrific cast, and amazing story. The mood is tense, and atmospheric, almost surrealistic. There are only hints that there's an evil presence lurking in Rosemary's shadow, and you feel uneasy when the horror starts. This film may not appeal to everyone, but if you loved The Exorcist and The Omen, give this one a look. Roman Polanski has crafted a great film, and with a second viewing, I thought it was a definite classic of horror. Some may find this one a tad too long, but the payoff is worth it. I think that Rosemary's Baby is one of those films that you need to give at least a few viewings to really enjoy. Rosemary's Baby took a few viewings for me to really get into. What makes this film such a classic of horror is the strong elements of tense atmosphere to a memorable climax, something that is missing from today's horror films.