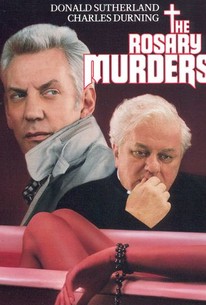 A priest is conflicted following a string of murders which target fellow priests and nuns in this dark mystery drama. After a black rosary is found at the scene on the body of those who have been murdered, Father Robert Koesler (Donald Sutherland) hears a confession for the crimes from the other end of a partition. This presents a moral quandary for Father Koesler: does he remain silent after being forced to absolve a killer for his heinous sins, or does he turn his back on his sworn duty as a priest and reveal what he knows about the killer to the authorities? Directed by Fred Walton, from source material written by William X. Kienzie and adapted by Walton and Elmore Leonard, the film co-stars Charles Durning and Josef Sommer.

Critic Reviews for The Rosary Murders

Explores the dark connection between guilt, sex, and Catholicism.

Audience Reviews for The Rosary Murders

A little dated, but a watchable film, however if you're looking for gore, there's none to see