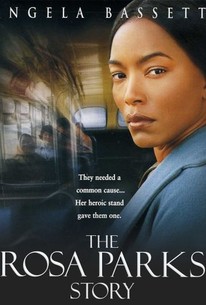 Angela Bassett plays the title role in this meticulously detailed biography of pioneering civil rights activist Rosa McCauley Parks. Even as a child, Rosa stands separate from her fellow African-Americans; instead of being shipped off to a shabby public school, she is enrolled in a private classroom run by Quakers, who encourage the girl to transcend the severe limitations of legalized segregation in her home state of Alabama. In her late teens, Rosa marries barber Raymond Parks (Peter Francis James), a politically savvy and outspoken proponent of equal rights for all. For many years suffering in silence as the iniquities of the South's Jim Crow laws consign her to second-class-citizen status, Rosa finally joins the local branch of the NAACP with the encouragement of her childhood friend Rebecca "Johnnie" Carr (Tonea Stewart) -- much to the dismay of husband Raymond, who feels that the organization is ineffective in its ongoing battle against the white power structure. Rosa's personal struggle against institutionalized racism reaches its zenith on the night of December 1, 1955, when, bone-weary after a long day's work as a seamstress at a Montgomery department store, she refuses to give up her seat on a bus to a white man -- and is promptly arrested. Thus are the wheels set in motion for the first major Civil Rights demonstration of the 1950s, with Rosa rising to heroic status in the eyes of her people, an event that also profoundly alters the life of local religious leader Martin Luther King Jr. (played by the Reverend's son, Dexter Scott King). Mostly filmed on location in Alabama, The Rosa Parks Story features Cicely Tyson as Rosa's strong-willed mother Leona and Mrs. Parks' longtime friend Rebecca Daniels Carr in a cameo role. The film was shown as part of CBS' celebration of Black History Month on February 24, 2002.

Martha B. Knighton
as Miss White

Angela Bassett brings out complex layers of humanity in CBS' The Rosa Parks Story, a tasteful and stylish biopic as much about love and inspiration as it about the birth of the Civil Rights Movement.

What Bassett accomplishes as Parks is the kind of heroism so difficult that it ought to have been impossible.

I adore Angela Bassett and I think she did such a great job. This movie tells Parks' history from childhood all the way up to the Montgomery Bus Boycott. The movie was laced with real footage from the civil rights movement. It was a nice touch. There were many scenes that were simple yet packed a punch.