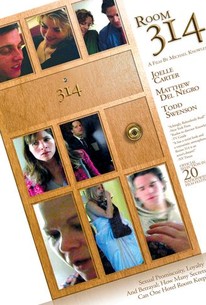 Five short stories play out in one room at a New York City hotel in this episodic independent comedy-drama. Stacey (Joelle Carter) wakes up one morning with no clear memory of what happened the night before, but the fact she's sharing a bed with Nick (Matthew Del Negro), a strapping professional football player she barely knows, offers a significant clue. Gretchen (Sarah Bennett) discovers her husband has rented a hotel room without telling her, and she comes to the city to confront Harry (Michael Laurence) about what he's doing; while she thinks he's seeing another woman, the truth is something far more disturbing. Jack (Michael Knowles) is a salesman in town for a convention along with one of his co-workers, Kathy (Robyn Myhr), and he attempts to persuade her to trade their professional relationship for something more intimate. Matt (Todd Swenson) is a guy from out of town who thinks he's in luck when he hooks up with Tracey (Monique Vukovic), but as the evening wears on he realizes he's gotten more than he bargained for. And David (Michael Mosley) has come to the city with his girlfriend Caly (Jennifer Marlowe) to attend his brother's wedding, and the circumstances have brought his insecurities about their relationship to the surface. Room 314 was written and directed by first-time filmmaker Michael Knowles (who also plays Jack) and was adapted from his play.

Michael Mosley
as David
View All

Thesping is first-rate across the board.

Room 314 cracks open the door of an anonymous hotel room where, at different times, five couples navigate critical moments in their relationships.

A pageant of white heterosexual encounters of the inconsequential kind.

It's the movie's generic dialogue and weak acting that stand as its most noticeable attributes.

Its creative impulses are an empowering example of do-it-yourself filmmaking, even if its encounters are subtly nuanced as often as they are unnecessarily schematic.

While the cast is uniformly committed, some are able to make more of the material than others.

There are no featured audience reviews yet. Click the link below to see what others say about Room 314!