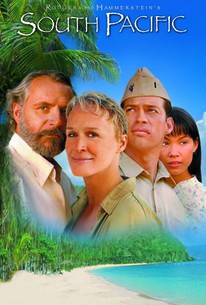 Rodgers and Hammerstein's award-winning musical +South Pacific, based on stories by James A. Michener, successfully debuted in 1949, and has since been performed scores of times on-stage and onscreen. Its revered musical score is infused with many singable favorites. This made-for-TV movie rendition, shot in Australia, originally aired on ABC and features award-winning actors Glenn Close and Harry Connick Jr. Set on a naval base in the tropics during World War II, the dual love story reveals the challenges faced by romance through racial prejudice and war, as demonstrated by the struggles of the tale's two couples.

This ABC version captures many of its stronger qualities before giving way to fabricated action scenes at the end.

... it bursts into unlikely song at the drop of a heavy cue, and the end is so rushed that it's empty of feeling and affect.

There are no featured audience reviews yet. Click the link below to see what others say about Rodgers & Hammerstein's South Pacific!