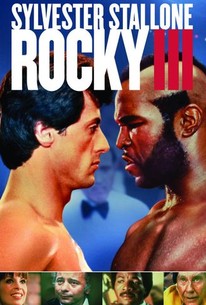 Critics Consensus: It's noticeably subject to the law of diminishing returns, but Rocky III still has enough brawny spectacle to stand in the ring with the franchise's better entries.

Critics Consensus: It's noticeably subject to the law of diminishing returns, but Rocky III still has enough brawny spectacle to stand in the ring with the franchise's better entries.

Critic Consensus: It's noticeably subject to the law of diminishing returns, but Rocky III still has enough brawny spectacle to stand in the ring with the franchise's better entries.

Sylvester Stallone returns to the character which made him famous in this wildly successful sequel. Rocky III starts with the Italian Stallion so famous that his likeness is everywhere, including pinball machines. Fame and complacency soon cause Balboa to lose his title to young thug Clubber Lang (Mr. T), who inadvertently causes the death of Rocky's beloved trainer, Mickey (Burgess Meredith), before their first championship bout. After sinking into a depression, Balboa must regain the love and support of his family, as well as the elusive "eye of the tiger," the hungry need to beat the opponent which former foe Apollo Creed (Carl Weathers) teaches him during this film's de rigueur training sequence. In the end, Balboa faces off against Lang for a second time. "Eye of the Tiger," the theme song Stallone commissioned from the band Survivor, became a huge hit single.

Gilbert B. Combs
as Challenger

Alex Brown
as Opponent
View All

In Rocky III, Rocky Balboa achieves a peace and contentment with both his strengths and weaknesses that he hasn't shown before. He's still growing.

Rocky III is an engaging exercise in discreet, incisive and good-humored hokum.

The real question with Rocky III was how Sylvester Stallone could twist the plot to make an interesting difference. He manages.

Learning, especially from Scorsese, in his approach to action and performance, writer/director/star Stallone has somehow contrived to make each of his movies into a more magnificent spectacle than the last.

Mr. Stallone, the star of Rocky III as well as its writer and director, is hard put to find problems with which to freight his gold mine of a character, now that Rocky has everything.

Another return to the ring for Rocky Balboa sees Stallone ditch drama for all-out adrenalin-fuelled entertainment.

The fight scenes are brilliantly shot, but there's a total absence of talent. [Full Review in Spanish]

Rocky III marks the point where the series starts to get silly, but the end result is so enjoyable that it's hard to carp too much.

In Rocky III we begin to see a transformation from the grounded, relatable realm of the first two films into something a little more suited to the Reagan-era milieu in which it was presented.

An entertainingly thrilling and inspirational action/drama that although a step down in terms of quality, still contains the heart and emotional punch that made the first two Rocky films so great.

Bigger but not better.

Apparently, the worst that can happen to any fighter is to get civilized, and so the great underdog drama of the previous films is gone in this forgettable, unnecessary third installment now that we are left with a famous boxing star fighting a psycho killer.

The third instalment in the "Rocky" franchise is a little underwhelming, albeit enjoyable. The cast works together better than ever, and the bond between Rocky and Apollo Creed is the best chemistry in the series yet. Deep down, this movie has elements that have been missing throughout the years in the previous films, but the script is kind of lazy and the fights don't seem as inspired. Still, the final fight with Stallone and Mr. T makes the film already good enough to view, because the raw feeling of that fight is almost better than any of the previous finales. It may not reach any new heights for the franchise, but it's still enjoyable.

An unnecessary but entertaining chapter to the Rocky saga. Stallone laces up the gloves again. A very cliche and somewhat-misdirected plot, dialogue and moral knocks it down, but the energetic action and boxing drama and glory brings it back up and continues to swing to the final bell. 3.5/5