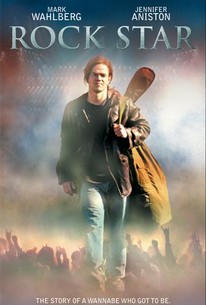 Critics Consensus: Like its title, Rock Star is rather generic, being not so much about the heavy metal scene than about rock cliches and formula.

Critics Consensus: Like its title, Rock Star is rather generic, being not so much about the heavy metal scene than about rock cliches and formula.

Critic Consensus: Like its title, Rock Star is rather generic, being not so much about the heavy metal scene than about rock cliches and formula.

Loosely inspired by the true story of the heavy metal band Judas Priest, this music industry fable from director Stephen Herek is based on a script by actor-turned-writer/director John Stockwell. Mark Wahlberg stars as Chris Cole, a wannabe rock star who works by day as a copy machine repairman and by night as the lead singer of Blood Pollution, a Pennsylvania tribute band that imitates the best-selling heavy metal rockers of Steel Dragon. Although he's supported by his girlfriend Emily (Jennifer Aniston), Chris is devastated when his friends kick him out of the band he founded. His humiliation doesn't last long, however, as Chris soon learns that he's been tapped to replace the lead singer of Steel Dragon, literally becoming a rock star overnight. Chris soon has everything he's ever wanted but is disappointed to discover that being a superstar isn't everything it's cracked up to be. Rock Star was produced under two other titles, "Metal God" and "So You Want to Be a Rock Star." ~ Karl Williams, Rovi

Every character becomes a cipher for a strangely reactionary morality tale.

It is a nonstop cliche.

An entertaining footnote to our karaoke culture.

The weight of what might have been hangs heavily over the proceedings.

A grueling and pointless endurance test

Capping off a not-to-be-missed soundtrack, real-life heavy metal musicians... add credibility to the film as they take to the stage as members of the Steel Dragon band.

Not great, but moments of guilty pleasure.

A watered down, lukewarm and very cliché rock fantasy...

The first half is hilarious but the second gives itself more to cautionary moralising and life lessons.

Just as it should be falling apart, its melodrama becomes more touching than ever, ultimately shaping a film about much more than any band and more poetic than any song on the radio.

The milieu is more convincing than the story.

This is a film geared towards those who sing their fav rock songs at full volume in their shower or car, half dreaming about the adulation and power of becoming a rock god. And not one of those phony ones, but the real deal, the ones that believe in the dream. It pretends (like Cecil B. DeMille used to do) to look down on the extravagant lifestyle, the posing, the groupies, "but first let's just get a little taste of all that to begin with". The actors do well conveying the belief in the dream of rock n' roll, and look properly surprised to discover the seedy underbelly of the game. All in all not a clumsy effort as most rock n' roll fantasies tend to be.

Dream big. Live the life. Great Movie! Simplistic and Enjoyable. This was a very real movie of a real rock band. I think Mark and Aniston did great acting roles. The story was immensely interesting and it had a terrific ending that was just right. Very nice cast! Chris Cole was born to rock. His longtime girlfriend Emily believes his talent could take him all the way - but Chris worships at the altar of Bobby Beers, the fiery frontman for heavy metal legends Steel Dragon. By day, Chris still lives at home with his parents and spends his days repairing copy machines. But when Chris takes the stage, fronting Pennsylvania's premiere Steel Dragon tribute band, all of that disappears. Chris Cole is Bobby Beers - mesmerizing audiences with his perfect imitation of Beers' electrifying vocals. The night his bandmates boot him out of the group, Chris is devastated until an unexpected phone call changes his life forever: He, Chris Cole, has been tapped to replace Bobby Beers as the lead singer of Steel Dragon. In an instant, Chris rockets to the dizzying heights of sudden stardom, rising from devotee to icon, from rock fan to rock god the wanna-be who got to be. So what happens when an average guy gets everything he wants and discovers it's not enough?

It's actually a lot better than it gets credit for. It's one of Mark Wahlberg's best performances and a very captivating story from start to finish. It criticizes the hairbands of the 80s, but also show how many people they inspired and how much they meant. I love the message of being your own person, even if trying to be someone else can make you millions of dollars and fame up the wazoo. The supporting cast in this is amazingly underrated, much like the movie itself.

As a diehard fan of heavy metal music, I for one saw this film, and definitely loved it. loosely based on Rob Halford leaving Judas Priest and being replaced by Tim"ripper" Owens, a fan of the band and singer for a Priest tribute band. Rockstar should appeal to metalheads everywhere because this film simply rocks. The film has it's downs of course, it's not perfect, but it manages to entertain you with blazing metal music, and other metal hellraising shenanigans of the band in the film. The cast do a good enough job, and Mark Wahlberg is quite good as Chris Cole the lead singer of Blood Pollution a Steel Dragon Tribute band. One Day after a fight, Chris gets kicked out of the band, and receives a call from Kik Cuddy, guitar player for Steel Dragon. Steel Dragon want Chris to come to an audition because their lead singer has just been fired. Chris Cole goes to the audition and gets asked to join the band , which he accepts Neither he nor his girlfriend no what awaits them in the crazy world of heavy metal. Chris Cole rapidly becomes one of metals premier singers, and he discovers the debauchery of the life of a rockstar. Many real life musicians of the genre plays roles in this film , most notably Zakk Wylde of Black Label Society, Jeff Pilson Of Dokken and Ratt and Jason Bonham the son of the late John Bonham, phenomenal drummer of Led Zeppelin. I thought it was very cool that they had actual musicians in the film, and it added a touch of authenticity to the metal band in the film. This film may not appeal to a mainstream audience, but it will definitely appeal to musicians and metalheads. The performances are good enough, the soundtrack rocks and the film is a chaotic descent into the metalhead world. A very underrated drama. As a fan of the genre, and as a guitar player, I really do appreciate this film for what is is. Not flawless, but very good nonetheless.