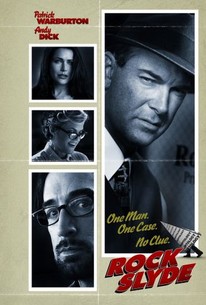 A bumbling gumshoe works to protect a hard drinking femme fatale from a mysterious stalker while contending with a cult leader who's trying to muscle in on all the local office space. Rock Slyde (Patrick Warburton) is a hardboiled private dick whose brawn trumps his brain-power. He isn't too bright, but he always gets his man. One night, Rock is in his office when Sarah Lee (Rena Sofer) bursts in looking for protection. Someone is following her, and she's willing to pay to find out who it is. Meanwhile, local cult leader Bart (Andy Dick) is expanding his empire, and he needs more room to grow. His headquarters are in the same business park as Rock's office, and so far Bart has managed to coerce every other tenant into signing over their lease to him. But Rock isn't about to budge. Later, while Rock is away working for Sarah Lee, his faithful secretary Judy Bee (Elaine Hendrix) succumbs to Bart's quirky spell. When Rock discovers that Sarah Lee too is a devoted Bartologist, he vows to dismantle the cult leader's growing empire from the bottom up.

Eric Roberts
as Jake the Deliveryman

Brian Bosworth
as The Friendly Pirate

Rock Slyde takes a premise that would barely work as a Funny or Die sketch and expands it to feature length...

Sofer's character is named Sara Lee, and that's one of the film's more complicated jokes.

Just a string of nonsensical vastly unfunny jokes, gags, and one-liners all of which seems to have been written from comedy class 101 at the local community center...

...not horrible, but it's to a specific taste. Apart from resisting the advances of femme fatale Rena Sofer's mysterious Sara Lee because he has a thing for black women after spending his childhood days watching "Soul Train," Slyde faces down adversary cult leader Andy Dick (Blessed Guru Bart of Bartology) whose main objective is to take over Slyde's office space to gain control of the building while rescuing his brainwashed secretary from their evil clutches. Look out for cool cameos of "Dancing with the Stars" host Tom Bergeron, Eric Roberts (annoyed delivery guy) and that of Jason Alexander (Seinfeld) as a Jewish U.S. postal carrier. Good clean fun and Patrick nails the title character of Rock Slyde.