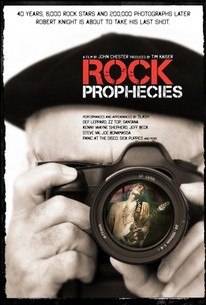 Photographer Robert Knight has been capturing rock & roll history through his camera lens since the late '60s, snapping some of the earliest appearances of Jimi Hendrix, Led Zeppelin, and the Rolling Stones. But not content to be merely a classic-rock dinosaur, Knight continues to champion and mentor early-21st century musicians like the Australian band Sick Puppies and Texan guitarist Tyler Dow Bryant. This documentary from filmmaker John Chester chronicles Knight's amazing life and career in rock music and features interviews with many of his admirers (and frequent subjects), including Slash, Def Leppard, ZZ Top, Santana, Jeff Beck, and Steve Vai. ~ Sandra Bencic, Rovi

There are no critic reviews yet for Rock Prophecies. Keep checking Rotten Tomatoes for updates!

There are no featured audience reviews yet. Click the link below to see what others say about Rock Prophecies!