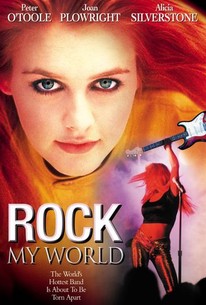 Veteran hack director Sidney J. Furie directs the silly straight-to-video comedy Rock My World. The aging stuffy English aristocrats Lord and Lady Foxley (Peter O'Toole and Joan Plowright) have fallen on hard times, so they loan out the use of their mansion to the American rock band Global Heresy. When the band's bass player mysteriously disappears, Nat (Alicia Silverstone) shows up to replace him. Then the servants don't show up, and the Foxleys are forced to pose and a maid and a butler in their own mansion. The culture class between the conservative English and the reckless Americans is played for comedy, leading to an ending where the power of rock & roll transforms both cultural groups.

Alex Karzis
as Ben
View All

There are no critic reviews yet for Rock My World (Global Heresy). Keep checking Rotten Tomatoes for updates!

Pleasant diversion with a silly premise but enjoyable on an escapist level. The script is really beneath the talents of two acting greats like Peter O'Toole and Joan Plowright but their skill is what elevates it above the norm. The rest of the cast is adequate, the music forgettable.