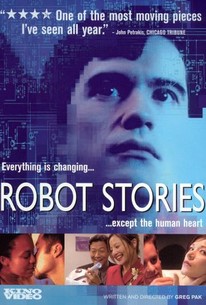 Critics Consensus: Although its 4 stories vary in quality, Robot Stories is still worth a look for Twilight Zone fans.

Critics Consensus: Although its 4 stories vary in quality, Robot Stories is still worth a look for Twilight Zone fans.

Critic Consensus: Although its 4 stories vary in quality, Robot Stories is still worth a look for Twilight Zone fans.

Greg Pak directs Robot Stories, a feature film made up of four separate vignettes set in the near future. In "My Robot Baby," Maria (Tamlyn Tomita) and Roy (James Saito) must take care of a robot baby before they can adopt a real one. In "The Robot Fixer," a car accident puts Wilson in a coma. His mother, Bernice Chin (Wai Ching Ho), tries to connect with him by repairing his old collection of toy robots. Her obsessive quest to find missing robot parts is observed by her daughter Grace (Cindy Cheung). In "Machine Love," a Sprout G9 iPerson (Greg Pak) is introduced to an office environment. In "Clay," sculptor John Lee (Sab Shimono) refuses to get scanned, which would merge his memory with a collective consciousness. He struggles to maintain his humanity against the judgement of his son Tommy (Ron Domingo) and wife Helen (Eisa Davis).

Terrence Archie
as Executive No.1

Johanna Lee
as Executive No.2

Although uneven and tentative, Robot Stories is sufficiently thoughtful, provocative and original to make you wonder what Greg Pak might do with access to better parts.

Robot Stories has the look and feel of an above-average student film, but Pak's potential promises better things to come.

Mr. Pak accomplishes the rare feat of making the viewer think and wonder as he sheds light on little corners of the heart.

These are tales from the heart -- pulsing to a high-tech beat.

Robot Stories is a both a throwback and, hopefully, a sign of things to come.

There's no pleasure in giving new directors bad reviews and it's especially unpleasant when what's wrong with their work isn't a clumsy performance or two, a sagging second act or a repugnant worldview, but a near-total absence of filmmaking talent.

Robot Stories is both heartfelt and entertaining. I found it to be one of the most human and humane science fiction films I've seen in a long time.

Pak sets himself up as a filmmaker to watch, a creator of intelligent, thoughtful stories that refuse to be contained by traditional definition.

The title encourages us to think of Robot Stories as the cinematic equivalent of a book of short stories, and I'd say a book in which half the stories are excellent is not a bad bet.

This compilation of four cinematic short stories is an uneven affair.

Each vignette is worthy of admiration - not too much admiration, as Pak's ability as a storyteller is more developed than his filmmaking skills.

While Pak shows promise, especially with the final segment, a meditation on the existence of the soul, his reach ultimately exceeds his grasp.

Rather than making one really good short film, director Greg Pak decided to film all four of his robot-themed short stories and compile them into one film. The first story, My Robot Baby, follows a couple as they take home a robot baby to show they are responsible enough to handle a real one. It's not a bad concept for a robot-themed film, and is a plausible scenario that will be familiar to anyone who had to take care of an egg for a sex ed class. As it turns out, the robot baby looks quite a bit like a football-sized egg with cardboard eyes stuck onto it. Despite the cheesy props the story does contain some interesting ideas, like when the robot's "mother" reprograms the bot so that it automatically takes care of itself. Unfortunately the concept was better explored and in much greater detail in Steven Spielberg's A.I., and it quickly dissolves into a silly suspense film when the baby robot runs amok late at night. The second story, The Robot Fixer, isn't really about robots at all. A distraught mother is visiting her comatose son, who has been hit by a car. While cleaning up his apartment, she and her daughter find his collection of robot toys. The mother decides to complete her son's collection in a symbolic bid to put her son back together. By the time this one was over I was ready to stop watching this turd, so I did. This review is a repost from my website: www.plasticpals.com

A collection of 4 short stories all revolving around robots (as the title implies). The stories have a kind of Twilight Zone feel to them but none are very good. My favorite was the third story, a tale of two robots who seek love. Definitely not the most original story but it was interesting. Each story is about the length of a TV Show minus the commercials. Acting: 6/10 Story: 6/10 Originalality: 7/10 Soundtrack: 4/10 Characters: 4/10 Overall Rating: 5.4/10

Robot Stories is an indie film that apparently had a budget of about five dollars. As the title indicates, there are four short stories, dealing with artificial intelligence in one form or another. There is very little heavy lifting on display here; no deep sci-fi ala Philip K. Dick or even pondering the ethics of Robotic Code, or, except for the last tale, any pondering of morality or the soul, as one gets with Asimov. Belying the title, these series of stories are concerned more with simple human elements, and really, robotics, or AI have very little to do with it. For example: the first story, entitled Robot Baby, deals with parenting more than anything. A young, successful career couple decides to have a child - only in this future scenario the couple must first tend and nurture a robot baby. There is a nice twist at the end of this story, which makes the viewing viable, but really, without the twist the story is very "been there, seen that". The second story is so very "so what" that I'm not even going to give it a second thought, while the third has only a "cute" factor going for it, along with one of two decent performance in the film (oddly by the writer/director himself - hmmm, perhaps the entire project was merely a way for him to show off his robotic shtick). The fourth story has a bit of gravitas to it, containing the other bright performance, in a tale dealing with questions of the soul and the definition of humanity. Here there is a bit of artistry in the filmmaking, but otherwise the stories are all very straight forward, and the direction and cinematography echo that. Overall, nothing to write home about, or even truly recommend.