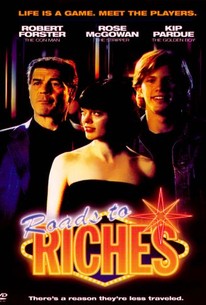 A pair of mismatched, down-and-out L.A. misfits find that their luck is about to change -- thanks to a charismatic, oblivious young buck from the Lone Star state -- in this psychological drama. Robert Forster plays Jack Waters, a con man whose best days are behind him when Henry (Kip Pardue) steps off a bus and stumbles into his life. Young, naïve, and attractive, Henry's everything Jack once was, and the old man plans to be a defacto agent of sorts, farming Henry out to appear on game shows and whatever else Tinseltown has to offer. But when Jack's unstable, erstwhile stripper girlfriend, Moira (Rose McGowan), sets her sights on Henry, she's determined to get a piece of the action -- both literally and figuratively. Meanwhile, Henry's career takes off, and the two hangers-on struggle desperately to take control of their "sure thing."

Critic Reviews for Roads to Riches

There are no critic reviews yet for Roads to Riches. Keep checking Rotten Tomatoes for updates!

Audience Reviews for Roads to Riches

I watched the last half of this movie while watching dinner one night. It did not look interesting enough to go back and see the first half.