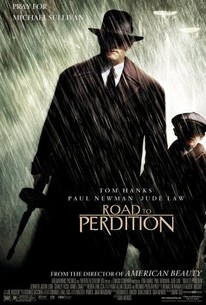 Critics Consensus: Somber, stately, and beautifully mounted, Sam Mendes' Road to Perdition is a well-crafted mob movie that explores the ties between fathers and sons.

Critics Consensus: Somber, stately, and beautifully mounted, Sam Mendes' Road to Perdition is a well-crafted mob movie that explores the ties between fathers and sons.

Critic Consensus: Somber, stately, and beautifully mounted, Sam Mendes' Road to Perdition is a well-crafted mob movie that explores the ties between fathers and sons.

A hit man for an Irish gang in the Depression-era Midwest, hit man Michael Sullivan is known to friends and enemies alike as the Angel of Death. Uncompromising in his work, Sullivan is just as devoted to his private life as an upstanding husband and father of two young boys. But when those worlds collide, taking the lives of his wife and younger son, Sullivan and his surviving son, Michael Jr. leave their sedate home life behind and embark on a startling journey of revenge and self-discovery.

Kevin Chamberlin
as Frank The Bouncer

The Monte Carlos
as Living Corpse

John Sterchi
as Cop At Diner

Robert Jones
as Farmer at Diner

Lara Phillips
as Ruby The Waitress

Mina Badie
as Betty The Waitress

Marty Higginbotham
as Banker
View All

News & Interviews for Road to Perdition

View All Road to Perdition News

Critic Reviews for Road to Perdition

So is Perdition still a must-see? No question. But it's tough to fuss about it much when a picture is this fussy.

Visually, the picture is all of a piece, but it's a self-conscious piece of work -- all dark-toned academic classicism.

What makes the movie pay off is moving pictures of real action and of intimate scenes between man and boy that are all the more moving for being understated.

While crisply edited and unindulgent, Mendes' work is gratifyingly old-school in its rejection of modern-day stylistic agitation, the better to achieve a slow but inexorable build to its climax.

Sam Mendes's 2002 follow-up to American Beauty finds him every bit as adept, arty, and Oscar hungry.

Ploughing a furrowed brow, Hanks is fatally miscast -- except that the story turns so sentimental and bathetic, he's actually in his element.

Casting Hanks as a heavy is no mistake here, and though the gamble is not entirely successful it's a fine experiment.

A beautiful elegy to a decaying world whose sadness lingers on.

Gangsters. Parents. Children. Honor. 'Road to Perdition' is all this and more, perhaps too perfect or too calculated, but with great cinema in it. [Full review in Spanish]

V﻿ery little of Road to Perdition lingers, except for a feeling that you've been carried along.

Crisply, starchily self-conscious in its efforts to be a gangster epic. A pretty-enough remote place, with its rain and snow and fedoras and trenchcoats, but it's still a long way from Boardwalk Empire and Miller's Crossing.

Audience Reviews for Road to Perdition

Sporting a terrific ensemble cast, stunning cinematography and an intriguing insight into fatherhood amidst the chaos of the mob, Sam Mendes' crime drama manages to explore familiar themes in a fresh and emotionally resonant fashion.

Enforcer Tom Hanks is forced to go on the run when his son witnesses a mob hit in his gloriously photographed gangster related road movie from Sam Mendes. In fact little about the film can be faulted technically; all the performances are first rate, it looks absolutely gorgeous and the score is haunting and beautiful. The brief explosions of violence counterpoint the warmth of the father-son relationship well and Mendes' particular brand of visual elegance is particularly pleasing. In fact it's hard to believe that the film is an adaptation of a comic book as it all feels very adult, preferring to explore the characters and their relationships to the kind of comic strip violence you'd usually associate with the genre, which makes for an unusually moving story considering the story revolves around Tommy gun toting gangsters. A refreshingly different take on the crime thriller.

Awwwwwwwww snaaapppp. Tom Hanks, Paul Newman, & Daniel Craig. Sam Mendes, the director of "American Beauty". Game over everyone. lol, too bad this is one of the most cliche mafia movies I've ever seen, but it executes it with high production values, an excellent screenplay, and cinematography that is done to a perfection that makes the familiar feel fresh. One thing to note is that there is a particular scene in "Road to Perdition" that is one of the most incredible scenes I've ever seen in cinema history. "Road to Perdition" may feel familiar at times, but it takes the familiar and perfects it.