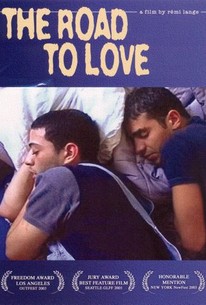 Remi Lange's The Path to Love (Le Chemin d'Amour) stars Karim Tarek as Karim, a college student who is making a documentary about male homosexuality in Arab culture. One of the men he interviews, Farid (Riyad Echahi), makes a concerted effort to seduce Karim. Karim struggles with both his sexual identity and how his actions would affect his girlfriend Sihem (Sihem Benemoune). The Path to Love was screened at the 2003 San Francisco Lesbian & Gay Festival.

Farid Tali
as Himself

Abdellah Taia
as Himself

Critic Reviews for The Road to Love

Doesn't add much to the coming-out genre, as it has been established in countless Sundance competition films and made-for-television movies.

Audience Reviews for The Road to Love

There are no featured audience reviews yet. Click the link below to see what others say about The Road to Love!

The Road to Love Quotes