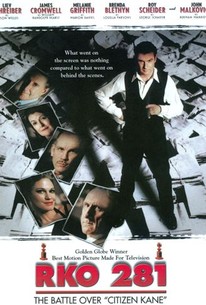 When RKO Pictures began work on production number 281, no one could have imagined that they were making perhaps the greatest American film of all time. But the moment Orson Welles (played by Liev Schreiber) announced that he intended to make a film based on the life of tyranical multi-millionaire publisher William Randolph Hearst (James Cromwell), they knew that they had trouble on their hands. Welles, the enfant terrible of American theater and a household name thanks to his infamous radio adaptation of H.G. Wells's "+The War Of The Worlds," was signed to direct films for RKO, and he was given an unusually free hand to make whatever sort of film he wanted. But what Welles didn't count on was the power of Hearst to keep his film from being seen. RKO 281 is based on the true story of the making of Citizen Kane and the war of words between Welles and Hearst. It also stars Melanie Griffith as Hearst's mistress Marion Davies, John Malkovich as screenwriter Herman Mankiewicz, Brenda Blethyn as Hearst's movie columnist Louella Parsons, and Roy Scheider as George Schaefer.

David Suchet
as Louis B. Mayer

I'm not saying that RKO 281 is any sort of Citizen Kane, but it's got the same appealing insouciance, plus a much more satisfying and dirty-minded explanation of the true meaning of Rosebud.

This hardly seen film is a great watch for ANY Welles fan.

Wonderful TV movie about the pressures and ego clashes and politics surrounding the making of Citizen Kane.

High-pulp look at Citizen Kane's genesis is stylish but shallow.

...factual details aside, Ross and Logan make the history live. "RKO 281" is no Citizen Kane... but in its own way it pays homage to Welles and his film...

Schrieber brings Orson Welles to life with a fantastic performance telling the story of making "Citizen Cane". There's much more drama and humor to it than I expected. Like the recent "Trumbo" film, this is a work best enjoyed by Hollywood history fans and cinema geeks.

Having watched this directly after first experiencing Citizen Kane, I found RKO to be insightful, informative, and rewarding. Liev Schreiber was great as Orson Wells, as was John Malkovich. The film had its limitations, it was only focused on the creation of, and aftermath of, Citizen Kane; I wish it had been more expansive in its look at Welles. The depiction of Hearst also felt inadequate, but it was passable considering the short running time. That said, what time the film did spend on both characters was effective. Overall a good film, and definitely a good companion piece to Citizen Kane. 3.5/5 Stars

I am an Orson Welles fan, so I found it really interesting.