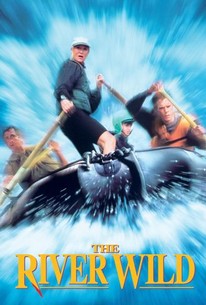 This thriller filmed on location in Oregon and Montana, features Meryl Streep as a daring, strong mother who must navigate a raging river to save the lives of her husband and son. Streep performed 90% of the river stunts in the film. To celebrate her son's tenth birthday, Gail, a former white water guide, takes him and his dog out West for a rafting trip. Her work-a-holic husband Tom joins them at the last moment. Gail was raised on the river and knows it intimately. They meet three "fishermen" who seem inordinately interested in Gail's knowledge of the river. In reality, the men are on the lam after robbing a cattle auction and killing two men. They are hoping to run the river past the treacherous white water stretch, the Gauntlet, and escape. The are led by the charismatic gun-toting Wade who eventually, hijacks the family. After dumping Tom and the dog upon the shore he coerces Gail to attempt the dreaded Gauntlet, which Gail has only run once before, by holding a gun to her son's head. The tension mounts as the spectacular rapids approach. Will they make it?

Glenn Morshower
as Policeman
View All

Critic Reviews for The River Wild

A stale product of Movieland mechanics, diluted from Griffith's Way Down East and John Boorman's Deliverance, this picture is just one more reason to worry about an outstanding talent.

The perfect high old time for audiences in the mood to be tossed into the spin cycle for a pulse-pounding thrill ride.

O'Neill proves to be a squeamish screenwriter. He doesn't allow his villain to do anything truly unnerving until the story's nearly done.

Constructed from so many ideas, characters and situations recycled from other movies that all the way down the river I kept thinking: Been there. Done that.

If watched from a mildly amused, forgiving distance, the movie has its enjoyable moments -- good and campy.

The thriller framework is still familiar, but the results exhibit a welcome freshness.

Streep catches the exhilaration of a housewife high on a little danger -- and of an upmarket actress in her first action movie.

A buff Streep vs. bad guy Bacon on a wild river journey in which good acting overcomes several cliches.

Terrible "suspense" movie. Predictable and no action until the end.

Audience Reviews for The River Wild

I really dig this flick. It's good to see Streep doing something this fun and Bacon makes a great villain. I've seen it at least 15 times and I never get tired of watching it.

Thriller about robbers who kidnap a family to help him escape down river. Good cast.

Exciting, but not rewatchable

"The River Wild" was one of my favorite movies of 1994. Gail (Meryl Streep), her husband, and her son decide to take a white-water rafting trip. They already have their problems because Gail's husband pays too much attention to his job and he doesn't pay enough attention to his family. However, before they know it, they'll have more deadly problems to deal with. Gail is an experienced and knowledgeable white-water rafter, and soon she and her family meet two mysterious strangers, one of which is Wade (Kevin Bacon). Wade asks for help to get to a certain place and Gail agrees to help, but little does she know that soon she, her husband, and her son, will be fighting for their lives. "The River Wild" is a better movie than a lot of critics and other reviewers have said that it is. It has exciting white-water rafting sequences, especially when Gail and the others try to live through 'The Gauntlet,' and it features a great performance by Meryl Streep. If you like exciting movies or anything to do with white-water rafting, I definitely recommend getting "The River Wild." NOTE: That was my Amazon review from the year 2001.