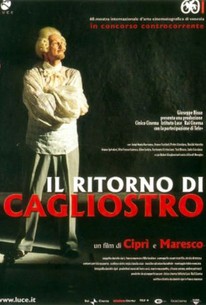 The Italian filmmaking team of Daniele Cipri and Franco Maresco is responsible for the satirical comedy Return of Cagliostro, set in Palermo during the late '40s. Luigi Maria Burruano and Franco Scaldati play a pair of brothers who decide to start up a film production company called Trinacria Films with money from corrupt politicians and religious leaders. The brothers don't know much about filmmaking, so they decide to do a remake of a popular adventure film about a magician named Cagliostro. They get American star Erroll Douglas (Robert Englund, also known as Freddy Krueger from Nightmare on Elm Street) to play the lead role. With an incompetent director (Pietro Giordano) and serious language barriers, the film's production results in catastrophe. Return of Cagliostro was shown in the Upstream program of the 2003 Venice Film Festival. ~ Andrea LeVasseur, Rovi

There are no critic reviews yet for Il Ritorno di Cagliostro (The Return of Cagliostro). Keep checking Rotten Tomatoes for updates!

There are no featured reviews for Il Ritorno di Cagliostro (The Return of Cagliostro) at this time.