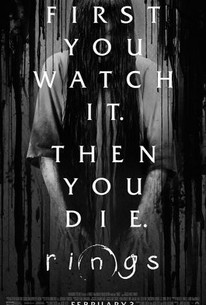 Critics Consensus: Rings may offer ardent fans of the franchise a few threadbare thrills, but for everyone else, it may feel like an endless loop of muddled mythology and rehashed plot points.

Critics Consensus: Rings may offer ardent fans of the franchise a few threadbare thrills, but for everyone else, it may feel like an endless loop of muddled mythology and rehashed plot points.

Critic Consensus: Rings may offer ardent fans of the franchise a few threadbare thrills, but for everyone else, it may feel like an endless loop of muddled mythology and rehashed plot points.

A new chapter in the beloved RING horror franchise. A young woman becomes worried about her boyfriend when he explores a dark subculture surrounding a mysterious videotape said to kill the watcher seven days after he has viewed it. She sacrifices herself to save her boyfriend and in doing so makes a horrifying discovery: there is a "movie within the movie" that no one has ever seen before...

Surely Alvelo
as Shanda
View All

How Family-Friendly Are Guardians of the Galaxy Vol. 2 and 3 Generations?
On DVD This Week: The Red Turtle, The Salesman, and More
Queen of Katwe, The Secret Life of Pets, and More on Netflix and Amazon Prime This Week

Pretty much everything about Rings is incoherent.

If crap movies carried penalties for inflicting torture on audiences, then Rings would merit a death sentence.

Rings embodies a common problem of attempted franchise revivals: indecision about its intentions.

In the end Rings didn't make me want to drink Drano. It had enough distractions but that's a low bar for a horror movie that includes D'Onofrio and Galecki, who could run rings around the rest of the cast given better material.

It's not a terrible setup. But Rings doesn't end up doing much with its fresh ideas.

Fans of the franchise will probably be pleased ... Too many horror sequels are content merely to recycle what worked the first time.

A disjointed retread of the The Ring co-written by the mastermind behind Batman & Robin, this half-sequel/half-remake is all kinds of stupid and boring. The cleverest thing it does is name its tiny-nippled, brotastic, generic white male lead "Holt."

A screenplay that, while faulty in spots, felt imaginative, Gothic, and paid tribute to the original story in a fresh way.

The film attempts to dodge already well-covered territory ... by going back further than the other films have, but then proceeds to suck all the fun out of it.

It's a sloppy movie, an ostensible horror film lacking in scares and weighed down by half-realized mythology and numerous repetitive stretches.

It is a rehash of the story we have seen before, nerve-jangling music and some pretty average special effects setting up the few and largely ineffective jump-out-of-your-seat moments.

This movie fails to accomplish any of its goals, and it doesn't care about surprising you.

Rings attempts to reboot the franchise for the digital age and fails horribly. The story follows a teenage girl who attempts to save her boyfriend by coping and watching an infamous video that supposedly kills you seven days after watching it, however her digital copy turns out to contain additional footage that she comes to believe was meant for her; leading her to go in search of its meaning. Once again the series tries to make Samara a sympathetic victim, but it doesn't work. Making the villain good and the good guy bad is a tried trope that's been played out for a while now. And, the new powers given to Samara are extremely contrived. Also, the performances are incredibly poor, particularly the lead (who has no charisma). A second rate B-horror film, Rings is incredibly dull and nonsensical.

An uninspiring horror that has little thrills in this obviously weak sequel to the franchise.

Okay, Rings is their one mulligan, let's just hope that the horror genre starts following the the path of great flicks that 2016 brought us. To be honest, I never expected much going into this reboot/sequel, and I felt even less attachment to it after I left the theatre. This is yet another horror franchise that is far too afraid to stray from what made it good in the first place, that almost everything seems like a rehash. Sure, it's updated for today and when a VHS player is used, it's justified. I admire that this film tries to take the story in a different direction, but all of the big moments are really just recreations of the original films. Having said that, the portions of the film that are original, I found myself uninterested in. Here is why Rings was completely unnecessary and why I hope the franchise stops here. There is only so much you can pull off with a premise like this, especially in today's day and age, due to the fact that everything is now digital. Opening with the most ridiculous sequence, taking away the thrill of only having one or two people viewing the tape, it felt like a roller coaster ride that shouldn't have been included in the film. Aside from that, there is an opening sequence just before the title card that had be intrigued. The tape is found after someone purchases an old VHS player at a flea market, which leads to a very eerie scene with some interesting visual effects. After that, the film very quickly dives into cliched characters and a plot that feels very heavy-handed. Building on the mythology as much as it possible can and having too many people exposed to this video all at once, Rings becomes confused with itself. A professor at a University holds a bunch of students in a room, searching for random people to put the curse on in order to continue the chain so nobody dies. Selling itself as a soft reboot for the franchise, this film also relies on you knowing certain elements from the previous films. The fact that you can copy the tape or in this case, the file, and hand it to someone else, creating an endless chain, is done throughout this film, but never explained. Only if you have seen the other films will you be able to fully comprehend the occurrences of this picture. There hasn't been a film in this franchise since the release of The Ring Two back in 2005, and playing out as more of a sequel, the timeline needs to continue, incorporating today's technology. This is precisely where the film fails. Social media is at an all-time high right now, so anyone that sees this video would share it to their friends and it would become a global topic. Everyone on the planet would eventually die from this video. This premise doesn't work at all nowadays. If the studio was truly desperate to bring back The Ring, I would have suggested a remake that takes place about 20 years ago. In the end, if you have seen any of the early entries in this franchise, nothing about this film should surprise you. Sure, it adds in a few new elements to keep things interesting, but Rings is poorly constructed and takes far too many turns with its plot to keep viewers fully engaged. Die hard horror fans may get a kick out of a few sequences, but Rings is all been-there-done-that in my opinion. I'm not a huge horror fan. I've said that many times and I will continue to say it, but Ringu and The Ring were great horror flicks that should have just stuck to those two films. For their time, they had an original premise that terrified audiences. Eventually, every single horror film will be reinvented and made into franchises if possible, and you know what? I'll never be against that, as long as a fresh premise is conjured up. Rings fails on everything it wants to be. There are some decent performances and some solid imagery, but this has been done much, much better in the past. I can't get myself to recommend it in any way.