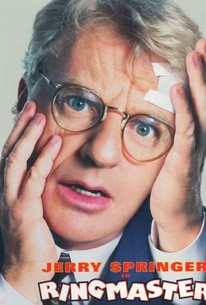 Critics Consensus: A crude, idiotic mess of a film.

Critic Consensus: A crude, idiotic mess of a film.

After the success of shock-jock Howard Stern's Private Parts, shock-TV host Jerry Springer made his own foray into celluloid. Fictionalizing only the name of his television show (what is normally called the The Jerry Springer Show, is now called "The Jerry Show"), Springer plays himself as a man who fronts a chair-throwing, dog-and-pony trash TV strip which gets high ratings in the backwoods, armpit communities of America. The story revolves around two sets of guests coming to Los Angeles to be on the show. First, the Zorzak family has slutty 19-year-old Angel (Jaime Pressly), sleeping with her stepdad (Michael Dudikoff). When her mom (Molly Hagan) finds out, she seeks revenge by sleeping with Angel's fiancé, Willie (Ashley Holbrook). The second group consists of Starletta (Wendy Raquel Robinson), who caught her man, Demond (Michael Jai White), sleeping with her best friend, Vonda (Tangie Ambrose). This makes all of them perfect for stardom on The Jerry Show. As all these guests arrive for their big day on national television, more chaos ensues with Springer getting propositioned by Angel and her mother. Even crew members show their stripes by getting involved in the sexual escapades with the guests. The whole scenario is finally brought to a knockdown, gender-bending finale live on national television -- right where it belongs.

Ron Orbach
as Man in Diner

Joel Farar
as Boy in Booth

You'd expect this material to be dealt with in a careless and seamy way, but Ringmaster is a better movie than I expected.

those hoping for inside dirt will instead be rewarded with a fictitious, shoddy piece of claptrap that has nothing to say about Springer...

If only Jaime Pressly got naked...

I think you have to applaud the absurdity of the concept, even if the execution ain't always all that.

Stay home and watch the genuine article instead.

Quite possibly the worst theatrical release that I've ever seen.

Didn't seem to add up to much when it was all over.

Beyond the generally inane concept and the fact that it's nothing more than a longer, unedited and somewhat "fictitious" look at the show, the film's biggest fault is that it's neither funny nor outrageous enough to make it even close to being worthwhile.

Screen It! staff
Screen It!
View All Critic Reviews (24)

Centering around an episode of The Jerry Springer Show and the build-up to it, this is an entertaining comedy with a good cast. Jamie Pressly stands out.

Never in my life have I witnessed such waste of celluloid. Ringmaster is one of the worst comedies ever made. This is the Passchendaele of comedy films. An utter piece of trash mixing every white trash stereotypes. This almost make Miss March a decent comedy (and it's the second worst film I have ever seen). The jokes are pointless and very lame. This is nauseating film with definitely no redeeming features to it. This film makes other bad comedies look great by comparison. I'd rather get by teeth yanked out with a pair of pliers next time than watch this shit film again. Avoid if you like good comedy, you won't find it here.

"Ringmaster" pretty much shows what it's like to be a guest on a talk show. The show in this movie is about stepfathers who have been sleeping with their stepdaughters. There's a lot of conflict between the guests on the show and a group of blacks that are staying in a room nearby. Of course a fight breaks out on stage along with a lot of arguing. "Ringmaster" also features some other things that go on behind the scenes of "The Jerry Springer Show" such as the women all wanting Springer's autograph and to talk to him in private. "Ringmaster" isn't that bad of a movie really. It has a few funny parts to it and it'll keep you entertained throughout most of the movie. It's also true to what "The Jerry Springer Show" was really like. My only complaints were that after awhile, the arguing between the families gets old and that the movie was a little slow getting to the good parts. However, if you've ever enjoyed watching "The Jerry Springer Show," you will probably like "Ringmaster." NOTE: That was my Amazon review from the year 2000. I was hyped to see this movie back when it was in theaters cause even though fake, I'd always liked watching Jerry Springer. However, this movie sucks compared to the show...the most memorable thing about it is Jaime Pressly's body.