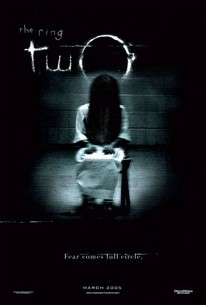 Critics Consensus: Ring Two serves up horror cliches, and not even Hideo Nakata, the director of the movies from which this one is based, can save the movie from a dull screenplay full of absurdities.

Critics Consensus: Ring Two serves up horror cliches, and not even Hideo Nakata, the director of the movies from which this one is based, can save the movie from a dull screenplay full of absurdities.

Critic Consensus: Ring Two serves up horror cliches, and not even Hideo Nakata, the director of the movies from which this one is based, can save the movie from a dull screenplay full of absurdities.

A terrifying legacy haunts a single mother in this sequel to the frightening box-office hit The Ring. Hoping to leave their terrifying experiences in Seattle behind them, Rachel Keller (Naomi Watts) and her son, Aidan (David Dorfman), move to the small town of Astoria, OR, where Rachel takes a job writing for the local newspaper. When Rachel learns of an unexplained murder, which occurred after a teenager watched a strange videotape with his girlfriend, she suspects her past is following her and she begins looking into the case. Rachel believes that the otherworldly Samara has come back; however, as she tries to convince others of the young girl's powers, her own son falls ill and is hospitalized, and Rachel's stories fail to convince either Dr. Emma Temple (Elizabeth Perkins), who suspects Rachel is guilty of child abuse, or David Rourke (Simon Baker), one of Rachel's colleagues who fears for Aidan's safety. Also starring Sissy Spacek, The Ring 2 was directed by Hideo Nakata; it was the first English-language project for the Japanese filmmaker, who previously made Ringu, the picture that was the basis for The Ring.

Cooper Thornton
as Father of Emily

Marilyn McIntyre
as Mother of Emily

Brendan Tomlinson
as Father of Jake

Phyllis Lyons
as Mother of Jake

Ted Detwiler
as Cop No. 1

Stephen Holland
as Cop No. 2

News & Interviews for The Ring Two

Box Office Guru Wrapup: "300" Reigns Again as Box Office King
Remaker Focused on "The Host" and "The Ring 3"
First Pics from "The Grudge 2"

View All The Ring Two News

Critic Reviews for The Ring Two

May not be a masterpiece, but it has its share of thoughtful little angles.

It is like an exercise in cinema mechanics: Images, music, photography and mood conspire to create a sense of danger, even though at any given moment we cannot possibly explain the rules under which that danger might manifest itself.

Watts is a terrific actress, but there's little she can do to cover the cavernous gaps in logic in Ehren Kruger's script.

A perplexing compound of the silly and the glum.

Too many loose ends.

The let's-travel-through-the-TV-screen sequence was better in Fat Albert.

While I found the original to be smart and a lot of fun, The Ring Two is just stupid and silly.

The Ring Two works because [director Hideo] Nakata concentrates on what he knows best without trying to adapt his style to fit Hollywood. For once a U.S. remake of a classic Asian horror film proves itself to be a furtive work of fusion.

There never should have been an addition to the original. The sequel makes a valiant effort at scary storytelling, but it suffers by comparison.

On it goes, albeit in a somewhat trance-like state.

The Ring Two has a great deal of mood and there are some genuinely chilling moments, but weak characters sap it of all strength.

Scarier than the first, but not as interesting.

Audience Reviews for The Ring Two

If you enjoyed the first Paranormal Activity film, you can probably admit that you had a good time with the first couple of sequels. There are times when a series is dragged out, but still works, and then there are films like The Ring Two that are made for money, and nothing else. I've said many times that I'm not a big fan of the horror genre, but when a good one arises, I will be the first to admit that it's great. I have a very open mind about watching films, so even the most bizarre of premises can intrigue me. Having said that, it took a lot out of me to sit through The Ring Two. Rehashing the first film and coming up with the most bizarre plot devices and set pieces, here is why The Ring Two fails on every level. Although The Ring Two is essentially about a video tape once again and how the ripple effects can really contribute to the terror, the opening of this film is what hooked me. Making me think this film was going to go in a new route, two teenagers are seen watching the tape that supposedly kills you seven days after viewing it. Projecting one of them into the video itself and having black ooze fills the floorboards, the tone of this film felt shifted from the first. Having said that, these tropes would just be overused throughout the film, never explaining how or why. What let me down even more was the fact that the director of the original Japanese film came back to direct this sequel. After his smash hit in Japan with Ringu, director Hideo Nakata directed a few others, but eventually fell completely off the radar after directing this sequel. It seems very odd that the director of the original Japanese version would want to make a sequel to a remake of his own property, but it seemed promising to me that the story was good enough to make him want to come on board. Having said that, I think his style was clashing with what was set in motion in The Ring. Trying to blend his tropes with the new-age effects was very jarring to me and his slow-burn style does not work as well as it did in his original, due to the fact that the remake moved at a much quicker pace. Sadly, having him direct may have been the wrong decision. From child-possession, to being pulled into the television set, to having a bathtub explode, to having deer attack a car, The Ring Two is full of surprises that never work in execution. I found myself chuckling at the fact that everything was being taken so seriously, when clearly it's going far too over-the-top, even for a horror film called The Ring Two. This is a problem I have with almost every horror film released nowadays, but the use of CGI is supposed to add to your film, not make it look artificial. The Ring Two was the beginning of an era that would overuse CGI, because it made it easier than building practical elements. In the end, The Ring Two is a film that tries to invent new ways of telling this plot, but goes too far over-the-top to be able to buy into it. Aside from a very cool opening in my opinion, there isn't much to like about this film. Clocking in at 109 minutes, this film really feels its length. Of all the films made involving this premise, this one finds a way to be the most boring, most uneventful, and the most poorly written and directed. Sure, you may be able to find a few frightening images, but this film as a whole just isn't all that scary. For these reasons and more, The Ring Two is one of my least favourite horror films of all time. If you haven't checked it out yet, you aren't missing out on anything.

Sequel to the superior remake of the Japanese horror flick Ringu (titled The Ring) in North America, this sequel is a painful, unimpressive mess of a horror film. The film was poorly constructed and had no memorable, memorable terrifying jolts that made the first film one of the best remakes in the genre. The Ring Two is a poorly made sequel with a poor plot, bad acting, bad directing and pretty much everything that makes a bad film, bad. The Ring Two was dull, unimpressive garbage that just didn't deliver what the first did, genuine chills. As a horror film, The Ring Two simply doesn't deliver. The script has limitations that prevents the plot to really take off. The acting is terrible with no real performance that stands out. The Ring II was created purely for cashing in on the success of the first, with no apparent thought of trying to create an effective horror film. The end result is a film that fails to tell an effective ghost story, and it ends up being a total mess. As a sequel, The Ring tries to duplicate what the first one did, however the film has nothing interesting to appeal to horror fans. I didn't like the film, and I thought it was an awful film. The Ring Two is yet another sequel that fails to deliver what the first one did, good entertainment. The Ring Two joins many other boring sequels that have failed to deliver the thrills and excitement of the original. As a horror film, this one fails. The plot, directing and acting all are bad; and you'd best avoid this on if you don't want to be disappointed.

Not bad in the way it was made, just bad because you get a been-there-done-that feeling.

The Ring Two is almost unbearable to watch, it sucked. The storyline was very dull and boring. The cast was exaxtly the same as last time, no big difference. The horrors are cheap redone scares of the first one, nothing new. This movie bored me, and was really stupid.