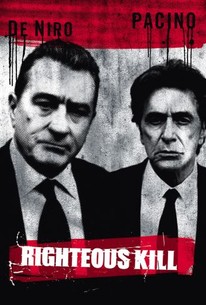 Critics Consensus: Al Pacino and Robert De Niro do their best to elevate this dowdy genre exercise, but even these two greats can't resuscitate the film's hackneyed script.

Critics Consensus: Al Pacino and Robert De Niro do their best to elevate this dowdy genre exercise, but even these two greats can't resuscitate the film's hackneyed script.

Critic Consensus: Al Pacino and Robert De Niro do their best to elevate this dowdy genre exercise, but even these two greats can't resuscitate the film's hackneyed script.

After 30 years as partners in the pressure cooker environment of the NYPD, highly decorated detectives David Fisk and Thomas Cowan should be ready for retirement, but aren't. Before they can hang up their badges, they are called in to investigate the murder of a notorious pimp, which appears to have ties to a case they solved years before. Like the original murder, the victim is a suspected criminal whose body is found accompanied by a four line poem justifying the killing. When additional crimes take place, it becomes clear the detectives are looking for a serial killer, one who targets criminals that have fallen through the cracks of the judicial system. His mission is to do what the cops can't do on their own-take the culprits off the streets for good. The similarities between the recent killings and their earlier case raise a nagging question: Did they put the wrong man behind bars?

This thriller by Jon Avnet is mostly by the numbers, and its surprise ending, though effective, feels somewhat forced.

Nearly everything about this film is a cliché.

Say it ain't so, Bobby and Al.

The movie, which has more than 10 credited producers, feels like one of those slick, for-the-money projects Hollywood studios cook up via graph charts and marketing surveys.

There's nothing righteous to be found here.

Instead, it's a rather pompous, disappointing one, and a squandered opportunity to boot.

A serial killer movie without any threat, a cop thriller going through the motions, and De Niro and Pacino seem blunted by the piece's overall lack of bite.

There's nothing virtuous about Righteous Kill -- it's as predictable as summer rain.

The stars were handed inferior material to work with and, at best, can only make this tired plot watchable.

The worst about Righteous Kill is that there's probably a perfectly acceptable procedural thriller somewhere in the mountain of cliches and stupidity that riddle the film.

All I'll say for the moment is: "Could have been so much better." Full review forthcoming.

Righteous Kill is an average police mystery/thriller, terribly disappointing considering the two acting giants who star in it. I always like Carla Guginio and John Lequizamo too, but they don't add much here. So, all these actors have done impressive work before, but director Jon Avnet doesn't get much done here. There is some intensity, but its all clichéd and formulaic. Really, is this the best everyone could do? I enjoyed watching Pacino and DeNiro (Rooster and Turk?) together, but RK doesn't compare to Heat, much less Godfather II. This is essentially a bigger budget episode of Law and Order.

ok...a pair of seasoned cops, Turk (Robert De Niro) and Rooster (Al Pacino) are on the case when a serial killer with a vigillante streak starts bumping off bad guys in New York City.They team up with younger detectives Perez and Riley and assisted by crime scene specilist Karen Corelli they work to uncover the killers identity with little more to go on than a poem left as a calling card at the scene of each crime. has an obvious twist~!

I thought it would be good, haven't seen them together since Heat. So I had extremely high expectations. This movie sucked. The acting was on top but it's terrible story can't save it. Grade: D