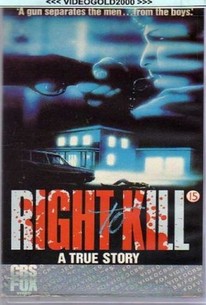 Christopher Collet stars as real-life teenager Richard Jahnke Jr. in the made-for-TV Right to Kill. After suffering years of torment and abuse from his father (Frederic Forrest), Jahnke can stand no more. Hiding in the closet of his Wyoming home, Jahnke hears the familiar sounds of his father beating his mother. "I just wanted to make him stop," Jahnke later explained to the authorities--after he killed his father with a rifle. Written for television by Joyce Eliason, it initially aired on May 22, 1985

Randy Moore
as Counselor
View All

Critic Reviews for Right to Kill?

There are no critic reviews yet for Right to Kill?. Keep checking Rotten Tomatoes for updates!

There are no featured reviews for Right to Kill? at this time.