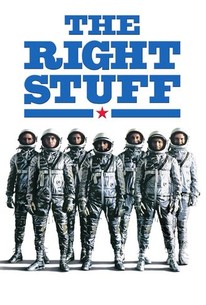 Critics Consensus: The Right Stuff packs a lot of movie into its hefty running time, spinning a colorful, fact-based story out of consistently engaging characters in the midst of epochal events.

Critics Consensus: The Right Stuff packs a lot of movie into its hefty running time, spinning a colorful, fact-based story out of consistently engaging characters in the midst of epochal events.

Critic Consensus: The Right Stuff packs a lot of movie into its hefty running time, spinning a colorful, fact-based story out of consistently engaging characters in the midst of epochal events.

Covering some 15 years, this film recounts the formation of America's space program, concentrating on the original Mercury astronauts. The film relates the dangers and frustrations facing the astronauts, the various personal crises involving their families, and the schism between their squeaky-clean public image and their sometimes raunchy, earthbound shenanigans,

Donald Moffat
as Lyndon B. Johnson

Eric Sevareid
as Himself

Bob Elross
as Review Board President

James Brady
as Aide to Lyndon B. Johnson

News & Interviews for The Right Stuff

View All The Right Stuff News

Critic Reviews for The Right Stuff

Philip Kaufman's 1983 film is an efficient and absorbing recapitulation of the main events of Tom Wolfe's book that still never succeeds in capturing the inner drives and ethics of the test pilots and astronauts - the "right stuff" never materializes.

Rarely has a film made a historic accomplishment seem so vivid and personal... It makes you wonder, quite suddenly, why there aren't more movies like this.

The Right Stuff is a spectacular celebration of those heroes of the skies -- those fly jocks who fought the demons of space to launch a new era in American air technology.

Kaufman has combined the resources and ingenuity of movie making with the freewheeling, damn-the-conventions style of of the New Journalism and come up with a generous, high-spirited look at the bravery and lunacy that was that era.

It means something to be a member of the brotherhood whose trials and accomplishments are celebrated so enjoyably in The Right Stuff.

Moviegoers seeking a grand yet edifying entertainment, right-stuffed with what Kaufman calls "seriousness of subject matter and a wild humor that comes out of left field," now know where to look...

An epic symphony of triumph that portrays modern man as the ultimate being driven by power. So visually stunning it looks almost experimental. [Full review in Spanish].

The Right Stuff (1983), Philip Kaufman's adaptation of Tom Wolfe's acclaimed portrait of the original NASA astronauts, is *the* American epic of the last great frontier and a genuinely romantic take on the first generation of space cowboys.

A great movie that unfortunately failed to attract audiences back in '83, this adaptation of Tom Wolfe's book about astronauts pays tribute to what we would like to believe represents the American spirit: hard work, perseverance, camaraderie and vision.

History, melodrama, comedy and satire are skilfully combined in this consistently exciting adventure. Visually and dramatically it rarely sags, there's a vivid array of characters and though it's a film with issues, these never eclipse the human drama.

One of the scattered handful of truly great American movies in the first half of the 1980s.

Audience Reviews for The Right Stuff

The heroes walking under our noses may have been walking on the moon as well. A great history lesson for those jaded in the age of technology. (Gotta admit that "Apollo 13" is betther, though.)

A bit of an interesting history lesson and character study about the beginnings of the American space program. Shepard is iconic as Chuck Yeager, Harris does justice as John Glenn, and Fred Ward lends pathos as Virgil Grissom. A feeling of cowboys looking for the next bronc to break pervades the work.

Based on Tom Wolfe's book, this is the story, spanning some 15-6 years about the beginnings of America's space program, focusing on the Mercury 7, but starting with test pilots like Chuck Yeager, who, despite breaking the sound barrier, and being widely considering the best test pilot ever, was not selected to be an astronaut. The primary focus of the film, and most of the book (from what I've been told) really only scratches the surface, as trying to tell the complete story would take like 10-11 hours or so. But the film uses its 193 minute running time to great effect, contrasting the lives of the men and their wives with the broader spectrum of the political and social contexts of the time. And, being an adaptation of Wolfe, there's also the nice undercurrents of countercultural liberal subversiveness at times. This is a very well made film, and cinematically yes it is truly amazing. As far as accuracy and history go, well, the film does suffer, and many of the people whose lives were the basis for this were rather critical of the portrayal of the times and events, and even Wolfe was very displeased with how this turned out, but even then, this is still a remarkable and wonderful piece of work, and one of the many great examples of "they don't make 'em like this anymore". And they probably wouldn't be able to either, at least not without some major changes. That's fine though, because this film does a great job of bringing out a sense of wonder and excitement. These men were real heroes who risked their lives to try to go where no one had gone before, and to try to do it before the Russians, since, at least then, that truly meant something. It really makes you yearn to achieve something great like this, and especially from a relatively low tech perspective. No super advanced computers at that time (being depicted in the film), and no digital technology to tell the film's story with either, so this really makes you appreciate the craft since there's no CGI. The ensemble cast is very notable here, and they give some terrific performances. To name a few: Fred Ward, Scott Glenn, Sam Shepherd, Dennis Quaid, Ed Harris, Barbara Hershey, Veronica Cartwright, and Pamela Reed. The cinematography is quite excellent, and overall the film really looks and feels as epic as its story. A main reason for this would have to be Bill Conti's rousing score, especially when the brass kick in, really leaving you stirred up. The film mostly uses it's long running time to great effect, giving tons of development to the characters, letting the story breathe, and keeping things from being even more rushed. That said, it does drag here and there at times, but the film also has a nice balance where tone is concerned, so there's a blend of humor, drama, adventure, etc. All in all, this is a fine film that, despite iffy history, is cinematically a high water mark for docudramas, and a great look at a wonderful moment in time.

This was a good movie, but had many flaws. There were way too many useless/prolonged scenes that extended the run time to a ridiculous 3hr 13min. That being said, it does have humorous and entertaining moments. It really captures the issues of everyone involved in this risky space mission and does a great job showing the media's influence on these men. Overall it is a decent, but inconsistent movie.