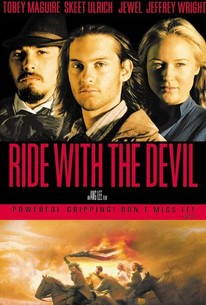 Ride With the Devil Photos

The American Civil War is about to break out and best friends Jake Roedel and Jack Bull Chiles find themselves thrust into battle when Union marauders destroy Jack's family plantation. They join the Bushwackers, a skilled unit of guerilla-style fighters, and fight side-by-side until some of the members begin to distrust Jake and his Union sympathizing father. Jake becomes isolated from the gang and strikes up a friendship with Holt, a former black slave, as his seperation from Jack takes one final, deadly turn.

Ric Averill
as Federal at Farm

Buck Baker
as Federal at Farm

Kelly Werts
as Fiddler
View All

Critic Reviews for Ride With the Devil

Lee appears to have been torn between making a character study and an action movie, so both elements get short shrift.

The intriguing (if not always successful) result is an oddly contemplative picture about a horribly bellicose time.

A film that would inspire useful discussion in a history class, but for ordinary moviegoers, it's slow and forbidding.

Oddly distant and uninvolving for such a blazing subject.

The film is less than the sum of its parts.

The Lawrence massacre provides no catharsis, only a sense of despair at the state of the human condition and at young men turned psychopaths.

the main characters, despite their various complexities, are never particularly compelling and therefore fail to draw us into (or help us make sense of) the film's abstract themes

Bucolic scenes of men at rest in beautiful wild landscapes and families gathered over meals in manors and homesteads are shattered by battles...

'It ain't right; it ain't wrong; it just is.' That line, in a nutshell, pretty much sums up Ride with the Devil.

This isn't the usual Civil War tale of learning to respect a man regardless of his race.... It's about how true freedom comes from love, from respect, and from self-sacrifice.

Audience Reviews for Ride With the Devil

Very interesting film which focuses on the American civil war but the Southern Confederate side as opposed to the more regular viewed Northern Union side. Its all based on fact (a book also) and the real leadership of 'Quantrill's' fighters in 1861, loosely depicting events of that time. Its also quite unusual as its directed by Ang Lee who's films have been admittedly diverse in range but you wouldn't expect this kind of theme from him. The cast in this film is what impressed me the most really, Maguire, Ulrich, Wright and Rhys-Meyers stand out from the crowd but all perform well plus they all look great in their costumes, think of a cross between 'Interview with the Vampire' and 'Colonel Sanders' :) with their long flowing hair and thin sharp facial hair. I liked how the guerrilla's were dressed with their dandy outfits and feathered hats also, unsure if that's how they really looked but its different and visually striking. Location work looks great, filmed in Missouri with plenty of beautiful woodlands and some authentic sets as you would expect in a major western. Not allot of action in the film, only the real event of the Lawrence Massacre is all you get which is decent but not a classic historic movie moment. For a war film (of sorts) its more about the relationship between friends amidst the battles really, not overly epic and emotional as you might expect which isn't a bad thing but with a long run time some may get turned off.

Every great director has one or two misfires. The Civil War drama "Ride With the Devil" is Ang Lee's, and it's a doozy. The photography is gorgeous at times; it captures the panoramic majesty of the American countryside. But everything else falls flat. The story is dull, the casting is spectacularly off, the actors were coached unbelievably badly, the editing is flaccid, the music is pedestrian, and the costumes and hair are downright laughable. Lee gives almost all the young male characters very long hair, making them look like girls. It's quite silly. Lee took a lot of risks with this film. He did not want to make a standard Western. This courage is admirable, but his judgment goes wrong at almost every turn. Chief among the disasters is the casting of Tobey Maguire in the lead role. I've never been a big fan of Maguire. His range is among the smallest of any big-name actor in American cinema today. All he seems capable of portraying is gentle, doe-eyed boys. His voice is so soft and high that you wonder if he ever experienced puberty. I like the idea of trying to build a Western around a girl-like male character. On paper it sounds interesting and innovative. But Lee was not able to make it work at all. His direction of almost all the actors was disastrous, and there are many of them -- far too many. Skeet Ulrich and Simon Baker are almost as bad as Maguire. Jonathan Rhys Meyers parades around like he's doing an imitation of Mick Jagger circa 1968. Jewel, making her acting debut, is bizarrely anachronistic, reeking more of 1990 than 1860. Only Jeffrey Wright, playing the one black character, knows what he's doing. Lee seems to have wanted to make a real effort to reach out to younger audiences. But filling his cast with Brat Pack youngsters isn't the way to go about that. He demonstrates here a real difficulty directing younger actors. The film Lee made before this was "The Ice Storm." After it was "Crouching Tiger, Hidden Dragon." What a stunning contrast there is between those two near-masterpieces and this goofy, boring dud.

Ride with the Devil was an interesting movie for me: For one it was the first movie I seen that actually had the ability to break Tobey MaGuires image of Spider-man in my head. I didn't once think he was going to spawn a web on any of the rider's that were approaching! :-) On a serious note - This movie was based in Missouri during and post-civil war in which we seen the struggles within the state that led to a divide of union loyalist and confederate guerrilla's that were both willing to risk it for all their believes. This movie had some courage in a few different ways. I really enjoyed how one of the confederate guerilla fighters was a black man (as many are afraid to risks that and I've only seen it seconded in Gods and Generals) as well as it steered away from the typical Jesse James movies that are often the only Missouri based stories. We also get a viewpoint from the Confederate side of things which also is typically frowned on and not noted in movies for fear of scrutiny about those who wish to degrade heritage and truth. We now get a glimpse away from the legend behind Jesse James and Bloody Bill Anderson and focus on the everyday riders that never gained fame but only lost and sacrificed in the struggle that touched every American life somehow or another... The actors were amazing, the gory was awesome, the soundtrack, the emotion, the action, and the off season from the action tied in with a few typical western story twist (such as how one man in the group went on to become an outlaw like so many of these men did being they were already sanctioned outlaws by both the south and the north) all came together nicely. Personally for all that it risked in the story it told and viewpoints I took I congratulate this movie for taking men who were noted as 'cowards' (worse than that of the poor confederate viewpoint by those who are ignorant in history as is) by taking the lowest considered form of Confederate 'Freedom fighters' and telling their story in a way like no movie has ever had the balls to tell it like before. It's an amazing film and even if I wasn't a civil war buff and a historian at heart I'd still recommend this movie to many who wants a true glimpse in a film that approaches the civil war without any bias and sticks as close to historic truth as any movie I've seen that wasn't actually completely historical based (and does better then even some of those). Well done!

Ride With the Devil Quotes