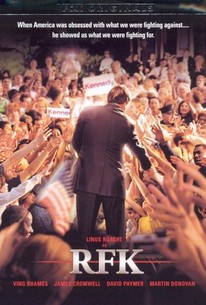 The first biographical film produced by the FX cable channel, RFK covers the last five years in the life of Robert F. Kennedy, here played by British actor Linus Roache. The narrative begins in 1963, with the assassination of Bobby's brother, president John F. Kennedy (Martin Donovan). His appointment as Attorney General already a source of outrage for resentful new President Lyndon Johnson (James Cromwell), Bobby now finds himself in the position of proving his worth all over again -- not only to his brother's successor and the world, but also himself. With the spirit of his brother acting as counsel, Bobby succeeds beyond his wildest dreams, especially in the field of social and racial reform. By 1968, he is a viable candidate for the presidency himself, and there seems to be no stopping him -- but fate, as it often will, again takes a hand in matters. Unlike previous cinematic recaps of the early 1960s, RFK is careful not to identify its characters as heroes or heels, but instead as human beings with all the strengths and shortcomings indigenous to the species. Filmed in Ontario, RFK originally aired on August 25, 2002.

James Cromwell
as Lyndon B. Johnson

Except for the eyes, Linus Roache doesn't much look like Robert Kennedy. But those eyes are crucial.

There are no featured audience reviews yet. Click the link below to see what others say about RFK!