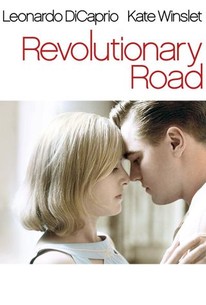 Titanic shipmates Kathy Bates, Leonardo DiCaprio, and Kate Winslet step onboard for director Sam Mendes' tale of suburban malaise in 1950s-era Connecticut. Adapted from the classic 1961 novel by author Richard Yates, Revolutionary Road tells the tale of a young Connecticut couple whose once-idealistic relationship steadily deteriorates into a ceaseless cycle of petty jealousy and bickering as they strive to retain their independence in the conformity-obsessed world of picket fences and perfectly manicured lawns. Ever since they first met, Frank (DiCaprio) and April (Winslet) saw themselves as special and different. They strive to form their relationship around higher ideals, though upon moving into their new home on Revolutionary Road, the defiant couple pledges never to be confined by the social conventions of the era. As time passes, however, Frank and April gradually become the very thing that they both feared most -- a typical suburban family complete with abandoned dreams and faded hopes. Frank loses his nerve after taking a comfortable job with a reliable salary, and April morphs into an unsatisfied homemaker desperate for passion and excitement. But April's independent spirit hasn't been suffocated just yet, and when she hatches a plan to head for Paris, her need to escape at all costs stands in direct contrast to Frank's desire to hold on to what they already have. ~ Jason Buchanan, Rovi

Mendes has made a troubling film that wrestles with big themes and touchy subjects, even if it is set in an overly familiar milieu.

This is a sobering, well-observed film that doesn't fully hit the mark but sets up enough pleasing ideas to chew on regarding ambition, marriage and ideals of how to live one's life, individually and as a couple.

A deeply felt, moving and genuinely tragic study of a marriage tearing itself apart.

It feels removed from the messy energies and doomy turbulence it depicts, filtering them through an aesthetic sensibility so tasteful, controlled and ultimately second-hand, that it can impress but never truly move us.

Maybe I would have been more willing to mull over that commentary if any piece of me had actually liked Frank and April Wheeler...

Based on the 1961 novel by Richard Yates, there is a been-there, done-that feeling about the film.

A powerful, wrenching piece of work and an acting showcase for a tremendous ensemble cast.

This is a handsome, intelligent and careful adaptation which may be too bookish... Always fully engrossing, even if it is too coolly detached to ever be involving.

Revolutionary Road shows something people think they want to see but really don't: what happens if Leonardo DiCaprio and Kate Winslet survive the Titanic.

It just touched on so many different issues like love, the sanctity of marriage, forgiveness, rage, entrapment, loneliness and helplessness.

A handsomely constructed, quietly devastating film concerning a couple trapped in a dull and ordinary 1950's life and desperate to find a way out of it, even if it means considering a dream-like scenario. Mendes really doesn't like life in suburbia, as, like he did in "American Beauty", he shows the disturbing, genuine thoughts of characters that, on the outside at least, have the ideal lifestyle. This film is excellently acted, Winslet is outstanding as always, DiCaprio turns in one of his best (if not his best) performances, and Michael Shannon steals the show as a mentally unstable man who is initially impressed at the couples' honesty, but eventually angry with what the couple decides. The negatives are some of the arguments between Winslet and DiCaprio make you wonder, "would even the angriest of people be saying the kind of things they're saying when they have kids around?!", and what happens with DiCaprio's character from a work standpoint is like the main plot out of Office Space, only Mendes takes this seriously.

Sam Mendes' 'Revolutionary Road' is a great movie in a lot of ways. The acting from its stars is incredibly powerful, Deaken's cinematography is graceful, and the story carries some considerable emotional weight. But 'Revolutionary Road' has a story that still feels unoriginal and sounds like a bore on paper. Entertainment value may be lost on great cinematic value, but what this film sets out to do, it does so so superbly.

Kate Winslet and Leonardo DiCaprio's performances are better than the movie itself. The movie is problematic, but these are one of the two greatest actors at their most emotional and rawest moment. I would say that the cinematography is picture-perfect.

Although flawed, this is an immensely powerful and moving film, thanks to outstanding acting, directing and intensely atmospheric cinematography. Mendes, Winslet and DiCaprio all outdo themselves here, and a typically understated and poignant score from Thomas Newman wraps the whole thing up.