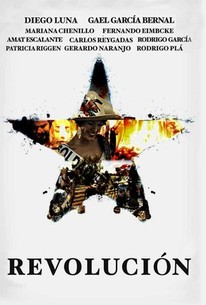 Ten Mexican filmmakers consider their nation on the centennial of the revolution in this anthology feature. For Revolucion, ten directors were asked to each contribute a ten minute film that in some way dealt with Mexico, its people, its national character and the legacy of the revolution. Actor Gael García Bernal directed Lucio, in which a young boy who is practicing the flag salute for school is confronted by his irreverent brother and must consider his views on patriotism and faith. Mariana Chenillo's La Tienda de Raya (aka The Estate Store) concerns a woman working for a discount store that pays her in company script rather than cash, making it even harder to climb out of poverty. Fernando Eimbcke directed La Bienvenida (aka The Welcome), in which a small town musician patiently waits for his opportunity to perform for a visiting dignitary. Two children come to the rescue of a priest tied to a tree in El Cura Nicolas Colgado (aka The Hanging Priest), a surreal episode by Amat Escalante. Rodrigo García's La 7th y Alvarado (aka At 7th and Alvarado) is an impressionistic piece in which the revolutionaries who fought for freedom and justice in Mexico pay a visit to modern day Los Angeles. Diego Luna's Pacifico tells the story of a man who takes some time off from his family only to discover how much they mean to him. A man trying to get medical help for his injured friend is forced to take desperate action in Gerardo Naranjo's R-100. Rodrigo Plá's 30/30 follows an elderly relative of Pancho Villa who is invited to a public celebration of the revolution but doesn't get the reception he expects. Este Es Mi Reino (aka This Is My Kingdom) by Carlos Reygadas observes a curiously aggressive holiday celebration in which natives and American visitors go on a tear while the community's poor look on. And in Lindo y Querido (aka Beautiful and Beloved) from Patricia Riggen, a family of Mexican expatriates living in America head home to honor an elder's final request. Revolucion received its world premiere at the 2010 Berlin International Film Festival.

The pieces are uneven, and only three bear direct reference to the title event per se.

Given such a broad concept, the possibilities for treatment remain almost limitless, but it's interesting to note that the first two episodes lay out the twin poles for approaching the stated thematic.

Commonalities emerge ... Yet the diversity reveals the complexity of contemporary Mexican culture and challenges assumptions about our neighbor to the south.

A remarkable exploration of an important historical event 100 years after the fact.

There are no featured audience reviews yet. Click the link below to see what others say about Revolución!