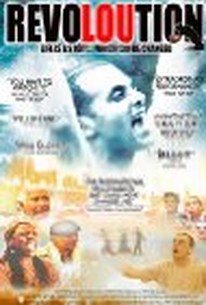 A stuttering street fighter becomes the voice of a new revolution in the first film structured around a shamanistic ritual and designed to have a transformative effect on the viewer by awakening the dormant areas of the mind with the power to fuel transformation and growth. Lou is a determined boxer with a stutter that belies his prowess in the ring. After receiving a closed head injury that forces him from fighting and threatens to rob him of his livelihood, Lou determines to make a name for himself as a fight trainer. When the 30-second-round format becomes too much for Lou to handle and his seemingly logical career choice receives a devastating blow, the dejected former fighter takes to the streets to create a volatile situation the likes of which have never before been seen in cinema history.

Burt Young
as Himself

Starla Benford
as Herself

A film with movement-sparking rather than moviemaking on its mind, Revoloution is a hopelessly muddled example of inspirational indie cinema.

You say you want a revoloution? Careful what you wish for.

Not even a grumpy cameo by Burt Young and some lovely shots of the Brooklyn Bridge can save a movie as punch-drunk as its benighted protagonist.

The story is hopelessly contrived and the characters -- especially blacks and Italians -- laughingly stereotyped.

Less a movie than an 80-minute promo for a self-help program for the seriously desperate.

Be aware that RevoLOUtion is a remarkably well-made 75-minute inspiromercial.

A bargain-basement independent which so abysmally examines the cathartic act of confronting personal demons that it inadvertently argues in favor of suppression and denial.

As a director, Carr has no sense of pacing (76 minutes seems like an eternity) and doesn't know when to tell Bret Carr the actor that his performance isn't working in a given scene. Carr's crying sequences look about as fake as a purple toupee.

Non-seekers ... may resent the obvious proselytizing voice-over, courtesy of a 'revoLOUtionized' Lou, and scripted psycho-babble.

There are no featured reviews for Revoloution at this time.