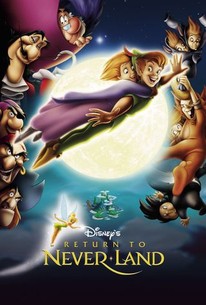 Critics Consensus: With its forgettable songs and lackluster story, this new Pan will surely entertain kids, but will feel more like a retread to adults.

Critics Consensus: With its forgettable songs and lackluster story, this new Pan will surely entertain kids, but will feel more like a retread to adults.

Critic Consensus: With its forgettable songs and lackluster story, this new Pan will surely entertain kids, but will feel more like a retread to adults.

Almost 50 years after Walt Disney brought James M. Barrie's classic children's tale Peter Pan to the screen in one of the best-loved animated features, the studio that bears his name revisits the story of the magical boy who doesn't grow up in this sequel. In London during World War II, Wendy (voice of Kath Soucie) comforts her children with stories about her youthful adventures with Peter Pan (voice of Blayne Weaver) in the fantastic world of Neverland. Young Danny (voice of Andrew McDonough) loves the stories and believes that they're real, but his older sister, Jane (voice of Harriet Owen), isn't so certain. Jane soon discovers her mother is indeed telling the truth when she's kidnapped by the evil Captain Hook (voice of Corey Burton) and spirited away to his lair in Neverland. Hook is still trying to capture his nemesis, Peter Pan, after all these years, and is certain he'll come to the rescue of his old friend, Wendy; however, Hook realizes too late that he's carried away Wendy's daughter instead. Peter comes to the aid of young Jane, but as they do battle with Hook, he realizes it will take some work before Jane will fit in with the Lost Boys. Return to Neverland includes original songs from Jonatha Brooke and They Might Be Giants. ~ Mark Deming, Rovi

A film lacking the wit, enchantment, and spark of the original -- despite being a shameless copy of it.

Children will enjoy Never Land for its adventure and physical humor. Adults may simply like strolling down memory lane.

If you've got a house full of tots -- don't worry, this will be on video long before they grow up and you can wait till then.

Though the characters may connect as nostalgia for boomer parents, their kiddies will wonder what all the fuss was about.

Everything about the film is dated, from plotting to animation.

Maybe this was a film that didn't need to be made, but parents with small children will be glad that Disney did, because it's a kinder, gentler trip to Never Land than the original, and a much safer bet for young children.

Has an unappealing main character drifting through a dramatically inert script.

not worthy of being a disney sequel

Didn't need to be made, no point to it.

I thought it was ok. I would rather watch Hook than sit through this though. It is better than most of the straight to DVD sequels that disney always puts out though.

Find me a good Disney Cartoon sequal that isnt Aladdin.