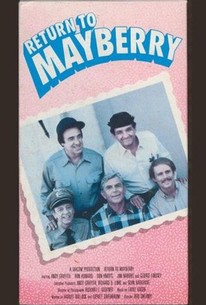 Inspired by the success of previous TV sitcom "reunion" films, Return to Mayberry debuted on April 13, 1986. Eleven of the original cast members of the classic Andy Griffith Show were reunited in this marvelous blast from the past. The plot finds former sheriff Andy Taylor (Griffith, of course), returning to Mayberry, North Carolina to visit his grown son Opie (Ron Howard, taking a break from his busy directorial career), who is now an expectant father. Andy's onetime deputy Barney Fife (Don Knotts) is running for the sheriff's post, so Andy decides to stick around to help out. Barney thinks he's found an excellent publicity ploy when he discovers what seems to be a bigfoot-style monster roaming around the Carolina hills. Actually, he's the victim of a cruel hoax, compelling Andy once more to come to Barn's rescue. Also in the cast is George Lindsay as Goober, Jim Nabors as Gomer, Aneta Corsaut as Helen, Betty Lynn as Thelma Lou, and Howard Morris as Ernest T. Bass. Conspicuous by her absence was Frances "Aunt Bee" Bavier, who was too ill to make a comeback. The highest-rated TV movie of 1986, Return to Mayberry might have resulted in a series, but Andy Griffith decided to switch professional gears and star as an attorney in Matlock.

Critic Reviews for Return to Mayberry

There are no critic reviews yet for Return to Mayberry. Keep checking Rotten Tomatoes for updates!

Audience Reviews for Return to Mayberry