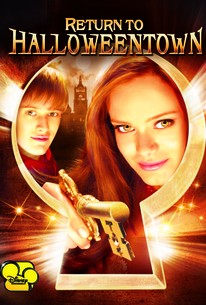 On the eve of Halloweetown's 1000th anniversary celebration, Witch University student Marnie Piper (Sara Paxton) must enlist the aid of two close friends in order to finally reveal a long-buried secret hidden in an ancient prophecy. Marnie has just won a full scholarship to the prestigious Witch University in Halloweentown, and she's eager to begin studying up on alchemy, amulets, and magic potions. While Marnie is all set to become Witch University's most popular coed, the new ban on magic at the school poses something of a problem for the young witch eager to realize her true powers. Later, Marnie discovers an ancient prophecy that holds the key to unlocking a legendary secret. Now, in order to ensure that Halloweentown's Millennial Celebration goes off without a hitch, Marnie will call on her old friends Ethan (Lucas Grabeel) and Benny the Skeleton in addition to seeking out the wisdom of new pals Professor Periwinkle and Aneesa the Genie. Will Marnie and her friends be able to fend off the evil that threatens to consume Halloweentown, or could it be that this strange and supernatural town has been marked for destruction since the day it was founded?

News & Interviews for Return to Halloweentown

View All Return to Halloweentown News

Critic Reviews for Return to Halloweentown

A cauldron of witchy magic and malice for tweens.

This is really just a star vehicle and nothing more.

There seems to be a significant effort to make a compelling story beyond the disaster that was Halloweentown High.

...harmless, mindless, juvenile fare that could pass for any average television comedy of the 1950s or 60s.

Audience Reviews for Return to Halloweentown

Better than the third film.