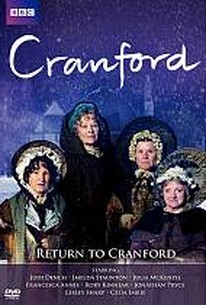 The specter of the railroad looming heavy in her conscience, Miss Matty (Judi Dench) rejoices upon learning that her maid Martha (Claudie Blakley) and carpenter Jem (Andrew Buchan) are expecting a child. Miss Matty's concern for young Peggy Bell (Jodie Whittaker) growing due to the fact that the young girl lives in virtual seclusion with her mother and overbearing brother, the kindly matriarch attempts to bring the two siblings together with William (Tom Hiddleston) and his cousin Erminia (Michelle Dockery) , who have recently returned to Cranford with Mr. Buxton (Jonathan Pryce). Meanwhile, Captain Brown (Jim Carter) receives word that work on the line has ceased, and scrambles to get the project back on track. Later, a sudden tragedy sends the entire town reeling. ~ Jason Buchanan, Rovi

Critic Reviews for Return to Cranford

There are no critic reviews yet for Return to Cranford. Keep checking Rotten Tomatoes for updates!

There are no featured reviews for Return to Cranford at this time.